Visually the new model is sleek and the new style panels offer unrivalled access to the engine bay from all three sides making maintenance and servicing easy. The revamped model, whilst still being simple to use, now has the addition of a programmable logic controller (PLC) with intuitive push button control panel as standard along with a remote control to enable the operator to adjust the jaw’s closed side setting (CSS) and to start or stop from the cab.

With almost 100 units sold globally, the Bison 120 has been a core product in the EvoQuip portfolio since its inception in 2016. Gaby Stewart, Product Manager, said “The Bison 120 has proved to be a very popular EvoQuip machine with customers throughout the world, due to ease of transport, simplicity of use, and being ideal for single operator use as well as providing the ability to quickly convert waste into profit.”

The revamped Bison 120 has undergone testing at various sites over the past six months, including at Watertop Farm in Ballycastle, where the jaw demolished an old farmyard barn originally built in the 1960s. While it initially was the barn roof that needed replaced, when the owner Patsy McBride discovered that he could recycle the material, he decided to do the renovation properly and demolish the old barn. As well as cost savings from being able to process and utilise the demolished material on his farm, Patsy was delighted to do his bit for the environment by reusing material rather than using virgin material—this is something he feels strongly about, “Due to the Bison’s performance we have material we can use rather than waste—taking the useless material to fill in some holes in the road around the farm. It has been an ideal fill material for sub-base on our lanes, creating new tracks for sheep, maintaining ground around gates and for infilling around our new build. It is a great bit of kit; we could keep it busy all year!” 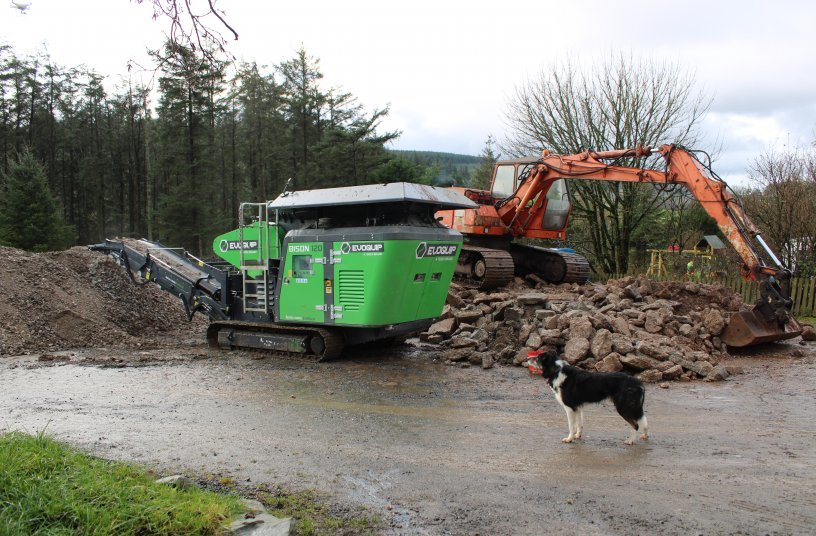 The Bison 120 has been specifically designed for operators for whom versatility, maneuverability and transportability are of key importance. It is small enough to fit inside a container for transport but strong enough to withstand the toughest of applications. The Bison 120 features a ‘680mm x 400mm’ single toggle Jaw Crusher. The Jaw is driven hydraulically, allowing the customer the ability to reverse the Crusher to clear a blockage as well as being able to run in reverse permanently for sticky applications such as asphalt. The ability to adjust the jaw setting and operate the plant from the remote control allows for a fast and simple set up for the customer. With its intuitive operation, quick set-up times, compact size and ease of transport the Bison 120 the ideal solution for all small to medium sized operators.