Facilities fit for the future: The Rokbak road to zero landfill and carbon neutrality

As the eyes of the world focused on Glasgow during the COP26 UN Climate Change Conference this November, Rokbak is reflecting on its own journey towards a more sustainable future.

Reducing environmental impact is a key tenet of the Rokbak brand, which is making significant reductions in carbon emissions, as well as energy and material use, at its plant in Motherwell, Scotland with the full support of parent company Volvo Group.

Last week Paul Douglas, managing director, Rokbak, delivered a keynote address at the National Manufacturing Institute Scotland’s (NMIS) ‘Manufacturing a Net-Zero Future’ conference where he highlighted the crucial role companies can play in delivering more sustainable factory operations. Paul also stressed the importance of collaboration and partnerships and Rokbak is working closely with its suppliers and customers in order to make a real impact.

A first major step towards reducing carbon emissions came in 2019, when the plant switched to a green tariff with its electricity supplier. The contract includes a Renewable Energy Guarantee of Origin (REGO) certificate to ensure all electricity delivered to the site genuinely comes from renewable sources – and is anticipated to reduce the plant’s carbon footprint by 900 tonnes (992 US tons) per year.

54 submeters are now being installed across the site to give greater visibility over electricity use and empower teams to drive their own efficiencies. Operational since the end of October, they give the teams insight into where electricity is used and how targeted action can be taken towards reducing unnecessary consumption.

The next big step for Motherwell is to tackle natural gas consumption, which is primarily used for space heating. The admin building and some of the other annexes have already moved over from gas to electric heating and cooling, while other areas will switch to electric-powered systems in 2022. That will leave the factory and the warehouse, which will also require new roofing and insulating cladding. 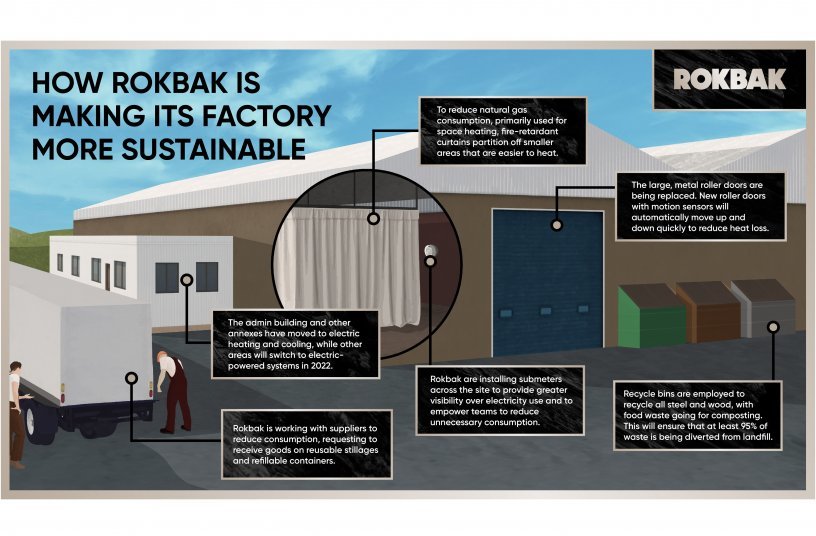 Improving the here and now

While this long-term project is in development, the plant has implemented two key measures to reduce gas use in the factory and warehouse. First, it has been compartmentalised into smaller working areas that are easier to heat – partitioned off by fire-retardant curtains. This is in contrast to the previous layout with just a single, large open plan layout.

Elsewhere, the large, corrugated metal roller doors are being replaced. The previous doors had to be manually winched up, so were often left fully or partially open, allowing heat to escape. The new roller doors are equipped with motion sensors, automatically moving up and down and therefore reducing heat loss.

Furthermore, the plant is about to finalise a contract for green gas, which comes from landfill, food processing or composting sites. It is difficult to quantify the carbon reduction this switch will achieve, but it is another step in the right direction. The plant is also finalising a contract to replace its forklift trucks with electric models, which will save about 75 tonnes (82.6 US tons) of CO2 per year.

When it comes to reducing material waste, the site is now practically landfill free and will soon apply for Volvo Group certification for demonstrating that at least 95% of waste is diverted from landfill. All steel and wood is recycled with food waste going for composting.

Rokbak is also actively working with its suppliers to reduce the amount of materials consumed in the first place, such as requesting to receive goods on reusable stillages instead of wooden pallets and asking oils or lubricants to be delivered in larger containers that can be refilled or repurposed. 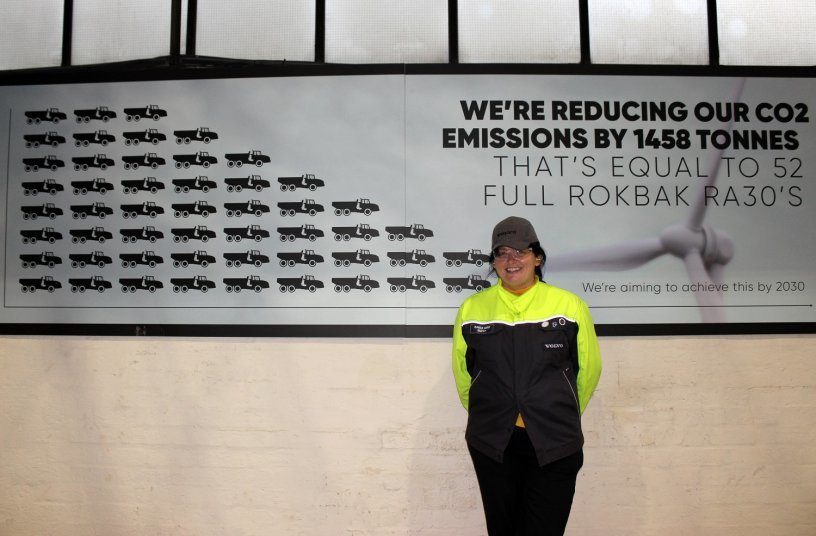 All these changes fit into the larger context of Volvo Group’s environmental mission, which in November 2020 became one of the first big equipment manufacturers to sign up to Science Based Targets. Volvo Group has committed to reducing operating emissions by 50% by 2030 and achieving net zero by 2040.

At the COP26 UN Climate Change Conference in November, Volvo Group President Martin Lundstedt attended as a member of the Swedish presidential mission. Rokbak is keen to see strong progress post COP26 and will continue working on its own local roadmap to meet global Volvo Group targets for carbon neutrality.

“The targets we have set ourselves at Rokbak and Volvo Group are tough, but I believe they are achievable. Volvo has shown its willingness to invest, and our staff and customers are also keen to do their bit,” said Karen Anne Duffy, HSE & Sustainability Manager for the Motherwell plant.