Manitowoc dealer GLI (Grues Levages Investissements) has erected a Potain MCT 58 tower crane using a helicopter on the island of La Réunion in the Indian Ocean. Manitowoc engineered and manufactured the crane specifically for the jobsite, and GLI transported it from Portugal to La Réunion, where the company completed the erection and commissioning of the crane.

The MCT 58 was purchased to replace an old Potain 427 E that was manufactured in the 1970s and installed in the 1990s on a hydroelectric dam over the Rivière de l'Est at the EDF Sainte-Rose power station in La Prise d’eau des Orgues.

EDF (Électricité de France) required the crane to help dismantle the old crane and carry out general maintenance on the dam — for example, on the 3 t cofferdams and 1 t water intake grid — as well as participate in a dam reinforcement project planned for 2021.

Because of the dam’s remote location at the foot of the Piton de la Fournaise volcano — one of the most active in the world — the crane components could not be transported by road. The only road access is a narrow tunnel suitable only for small city cars. This meant the erection had to be carried out using a commercial helicopter with a maximum payload of 1 t.

“It was a tough specification, which cranes from other brands would not have been able to meet because of the weight limitation on the helicopter. We collaborated closely with Manitowoc to adjust the capacity, technology, warranty and erection plan to meet EDF’s needs and our experience assured them that we could complete the task safely,” said Christophe Chappaz, technical director at GLI, who was in charge of the project.

The Potain MCT 58 was chosen, as it already has an option for all jib elements to arrive in 5 m sections that weigh under 1 t. An extra support was added to place the hoisting winch on the side of the jib, and the counter jib was supplied in three parts. Manitowoc also devised a special lifting plan to ensure the erection could proceed with all elements weighing under 1 t. The helicopter completed the erection in 26 flights.

“Usually, it would take around four hours to erect an MCT 58. We took a total of six and a half hours across two days due to the difficulty of using a helicopter. The rotor blades induce a swirling wind, which is difficult to manage, so it was important we took things slowly and steadily. You cannot rush when safety is critical,” Chappaz said. 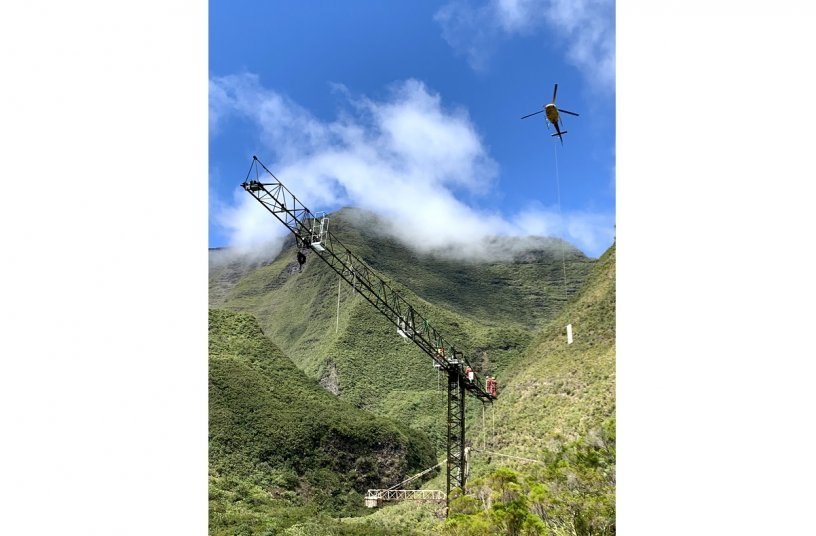 Given the damp environment at the dam, Manitowoc coated the MCT 58 in corrosion resistant C5-M paint according to the ISO:12944 standard. It installed a stainless-steel cabinet to protect electrical components and removed the electrical plugs between the winches and electrical cabinet to avoid corrosion issues.

The hydroelectric power station collects the rainwater that falls on the slopes of the Piton de la Fournaise volcano and funnels it through a 4 km supply galley into four, 25,000 m3 tanks. The topography does not allow for a dam reservoir. Hence, the tanks are emptied twice a day through four turbines 870 m below to generate 22 MW of power.

Hydropower is La Réunion’s leading source of green energy, accounting for almost a fifth of the French Overseas Department’s electricity supply, and the EDF Sainte-Rose power station is a key contributor, producing well over half of all hydropower on the island. It was essential, therefore, that the erection of the Potain MCT 58 was carried out with quality and efficiency in mind.

“I am very proud of what the GLI and Manitowoc teams managed with this challenging task. The crane is working well and EDF is happy with the result. Good project organization and close collaboration and communication were the key to success!” Chappaz concluded.