Potain proves perfect for bridge and road projects in China

Two breathtaking infrastructure projects in China highlight the speed, efficiency, and ease Potain tower cranes can bring to these developments.

For decades, Potain tower cranes have played a central role in infrastructure development across the globe, with their unparalleled reliability, performance, and control helping deliver increasingly advanced structures.

In China, infrastructure has remained a key economic driver for years, and the country’s Bridge & Road Initiative has triggered increased focus in this area. Needless to say, with a local factory in Zhangjiagang, Potain cranes have been a familiar sight on infrastructure jobsites across the country for decades.

In this article, we focus on how Potain cranes are helping bring to life two transport links that will dramatically transform movement around the Chongquing area of China. 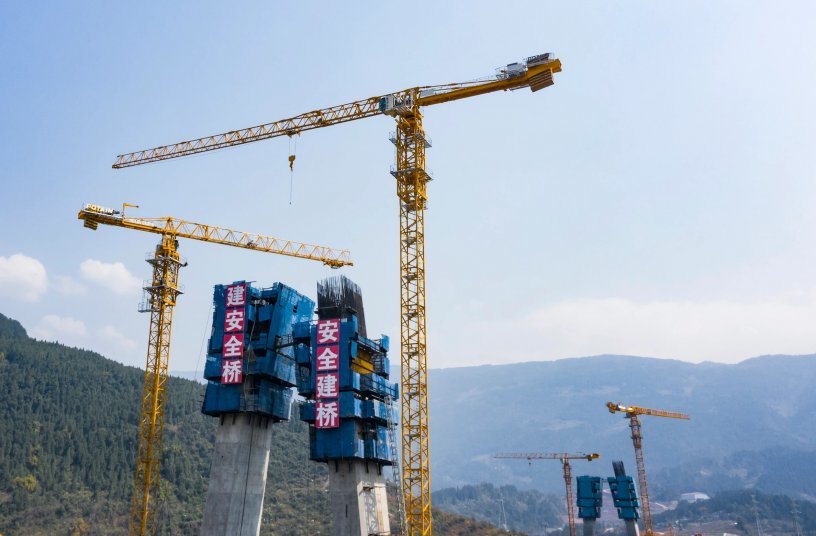 The Taiziping Bridge is being built over the Wujiang River in Chongqing, China to support the high-speed rail line serving the local region. The river is the largest of the tributaries serving the reservoir area of the Three Gorges Dam (the world’s largest power station, and another infrastructure project developed with cranes from Potain – this time MD 2200 Topbelt units). There are 10 Potain cranes building the cable-stayed bridge, which has a main span of 300 m (984 ft) and a total length of 2.3 km (1.4 miles).

To ensure the bridge has the strength and stability to host the high-speed rail line, it is being constructed from composite beams that are placed with extreme precision at a height of 70 m (230 ft). As well as strength and control, the contractor on the project was also looking for reliability and support from the crane supplier, given the challenging geological conditions surrounding the river which include sinkholes, caves, etc.

For the construction of the bridge piers, there were two MCT 565 M32 units and two MCT 205 units employed, all from the Asia Range of Potain topless cranes built in Zhangjiagang. The powerful MCT 565 M32 units offer up to 32 t (35 US t) of lifting capacity, allowing them to handle all concrete beams and other building materials with ease. Maximum height under hook on the project for both was 160 m (524 ft).

With the help of the four Potain cranes, work has now been completed on the piers and attention has turned to the rest of the structure. On completion, the Taiziping Bridge will form a crucial part of the Yuxiang High-speed Railway, further connecting central and western regions in China. 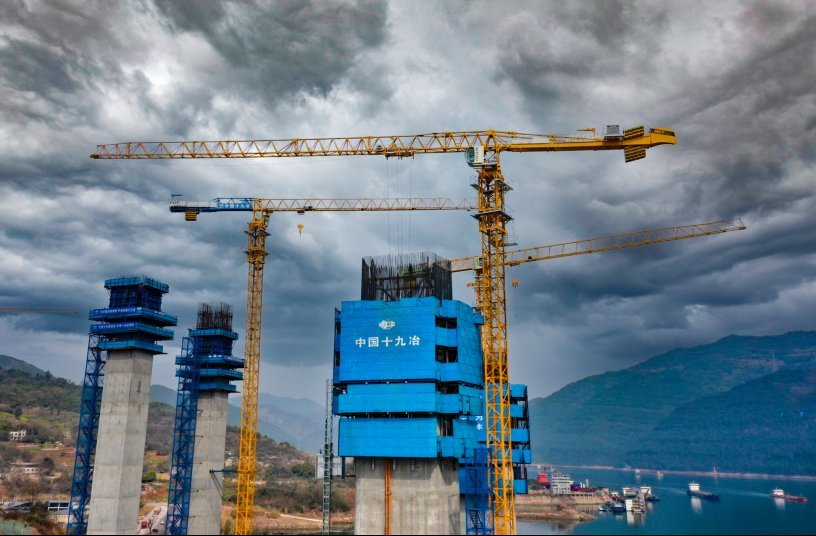 In the same part of China, a Potain crane is working on a road project, the Jianglong Expressway. Again, work involves building a bridge to form an important part of the new transport link. The Potain MCT 385 tower crane building the Fuxing Yangtze River Bridge is constructing a 215 m (705 ft) north tower of the structure. Main contractor is China No. 19 Metallurgical Chongqing Company.

The MCT 385 was selected for its impressive capacity and flexibility, as well as an ability to reach the heights the project requires with fewer tied-off supports than alternatives. The operator on the job also praised the crane’s air-conditioned cab, intuitive controls and ergonomic seats.

On completion, the Fuxing Yangtze River Bridge will be a single-span steel box girder suspension bridge with a main span of 1,208 m (3,963 ft). It will form a vital part of the Jianglong Expressway which will connect the Three Gorges Reservoir area with the Chongqing metropolitan area. Estimates suggest the expressway will benefit more than 120 villages, raising living standards for 300,000 people in northeastern Chongqing.