Ready for high alpine use: Two WOLFF 1250 B cranes successfully installed on the new XXL TV 60 Tower Sections at the Swiss Grimsel Pass

The wolf is known for its adaptability, a strength that also distinguishes the red WOLFFs on construction sites around the world. Latest proof is provided by two WOLFF 1250 B luffing jib cranes on the construction site of the Replacement of the Spitallamm dam at Lake Grimsel. In June, the two giant cranes were erected in the high alpine terrain on the new 6x6 meter TV 60 tower system specially developed for this project. Defying harsh winter weather conditions, they will build the new Spitallamm Dam for the Kraftwerke Oberhasli AG (KWO) on behalf of the ARGE Grimsel construction consortium during the next four years.

At roughly 1,900 meters above sea level life proceeds at a different pace. Whilst summer had already set in in the lowlands, there was still snow at Lake Grimsel when the two WOLFF 1250 B luffing cranes were erected this June. Thanks to good weather and smooth transport logistics, the eight-strong WOLFFKRAN erection team was able to erect the two cranes with 70 and 75 meter jibs to their respective final tower heights of 92.1 and 87.1 meters within just two weeks. Since virtually no crane components could be accommodated on the extremely confined construction site, the deliveries had to take place just in time. Not an easy undertaking with a total of 70 trucks, all of which had to reach the construction site via the winding pass road. The confines of the construction site were also challenging for the erection team, supported by a 500- tonne and 150-tonne mobile crane, with regards to the preassembly of the components on ground. 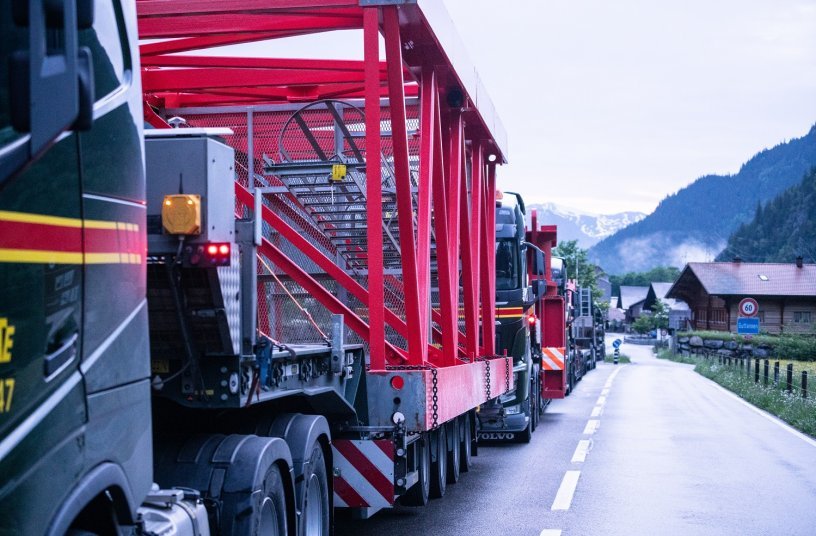 As if the sight of two WOLFF 1250 B cranes isn’t impressive enough, the actual stars on the construction site are the fourteen XXL TV 60 tower sections specially developed for this project. They were already erected last summer and have successfully passed their first winter test with snow heights of over ten meters on the site at Lake Grimsel. With seven sections per crane and a total height of 35 meters, the TV 60 sections form the stable tower bases for the two freestanding luffers that were now erected to their final heights using ten, respectively nine, smaller TV 33 sections.

Crane concept reconceived from the ground up

Since dismantling the cranes for the winter break and subsequent transportation and storage of the components would have been both cumbersome and unprofitable, the decision was taken to leave the cranes fully erected on site for the entire construction period of four years. As a result, WOLFFKRAN’s project engineers had to rethink the entire crane concept in order to meet the demands of the harsh winters imposed on the cranes: “Tie-ins on the rock massif or on the dam were neither a technical nor economical alternative,” says Rolf Mathys, Managing Director of WOLFFKRAN Schweiz AG “Freestanding cranes with a maximum lifting capacity of 20 tonnes in 1-fall operation and a tip load capacity of 11 tonnes at a jib radius of 75 meters that have to withstand wind speeds of up to 220 km/h, avalanches, and icing were simply not feasible with the regular WOLFF tower system and standard calculation for the WOLFF 1250 B. Everything needed to be recalculated from scratch. On the Grimsel, we are dealing with conditions that are entirely different from those of a standard construction site,” says Mathys.

From planning to assembly in less than twelve months

As a result of this detailed planning, WOLFFKRAN developed the new XXL TV 60 tower section with a side length of six meters last year. Additional innovations include: the VR 3360 connecting frame to combine the TV 60 with the standard TV 33 tower sections (side length of 3.3 m); the TV 33 S, a reinforced TV 33 specially made to meet the high static requirements at the transition from the connecting frame to the TV 33. “From project inquiry to the assembly of the new tower sections in less than 12 months! That’s what I call a truly notable achievement that was only possible thanks to the close collaboration between the Technical and Manufacturing Departments in Germany and the Swiss team on site.” 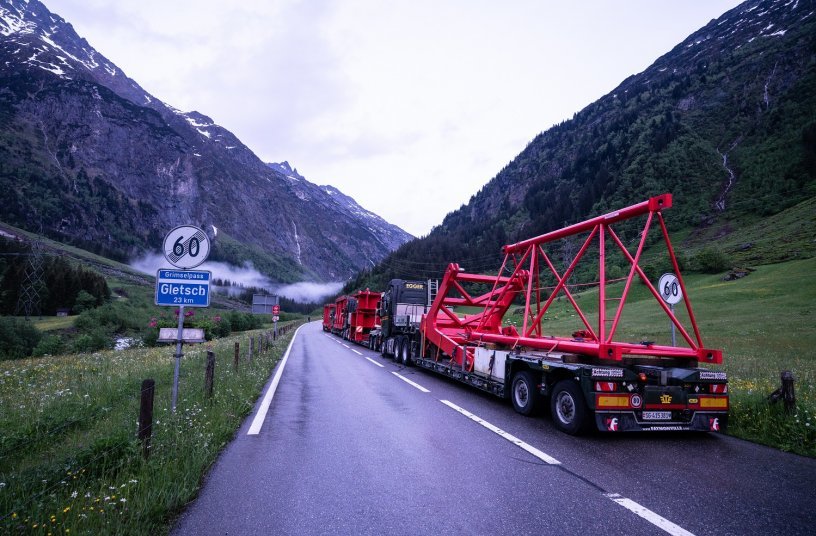 Ready for snow and icy conditions

Both the development of the TV 60 tower sections and the planning of the entire crane concept were due to the extreme loads caused by the ice, snow, and wind that the cranes are exposed to at Lake Grimsel. “Iced surfaces and what are known as ice flags on the slewing parts and towers must be factored in as additional wind surfaces,” explains Rolf Mathys. “Furthermore, snow and ice are literally heavy and therefore statically relevant.” Even the crane foundations have different dimensions than usual. Specially manufactured foundation anchors and more than 600 cubic meters of concrete provide the required stability for each of the cranes. This corresponds to roughly ten times the volume of concrete used for an average crane foundation.

The two WOLFF 1250 B luffing jib cranes have already begun with their main job on site, which is pouring concrete into the formworks of the new arch dam, virtually non-stop for the next four years. Less than seven minutes are needed to fill the 7m3-concrete-skip, lift the filled 20-tonne heavy skip, empty it into the formwork, and bring it back for refilling. The cranes will operate in cycles, with seven cubic meters of concrete, equivalent to the volume of a standard truck mixer, flowing into the new structure with each crane cycle.

Construction work will be carried out in double-shift operation in order to fully utilize the short construction phase before the renewed onset of winter. The crane operators have been extensively trained beforehand by WOLFFKRAN for this particular assignment.

Although just recently erected, the WOLFFKRAN team is already now preparing the two WOLFF cranes for their first hibernation in the Swiss Alps, which could start as early as October. Since access to the cranes needs to be ensured even with a closed mountain pass road and enormous masses of snow, WOLFFKRAN is planning the installation of a cable system between the existing (old) dam and the cranes together with a cable company.

In addition, the WOLFF cranes need to be winterized before the winter break. To prevent the slewing part from freezing solid, the slewing gear drive and motors are equipped with heating pads. The switch cabinet and cabin are also heated, and the slewing ring, hoist, and luffing rope all greased before the cold spell. Furthermore, an automatic rotation program will be carried out two to three times per day to loosen the icing. “A crane ballet without spectators”, says Mathys with a smile. “It’s a major endeavour, but it is still much more economical than disassembling and removing the cranes every winter and reassembling them again in the summer,” he summarizes. “I am confident that our WOLFFs will manage their high mountain tour well. We have intensively prepared for everything and are already in the planning stages for another high alpine project.”