The challenge of TECLA, the eco-sustainable 3D printed habitat, took form. “From the shapeless earth to the earth as house shaped”

WASP (Italy’s pioneering specialists in 3D printing) has completed the printing phase of the TECLA supporting structure, the first and unique fully 3D printed construction based on natural materials and made with multiple 3D printers operating at the same time. The innovative habitat model engineered by WASP and designed by MC A - Mario Cucinella Architects took form, a new circular model of housing entirely created with reusable and recyclable materials, sourced from local soil, carbon-neutral and adaptable to any climate and context.

TECLA (which takes its name from Technology and Clay) was made in Massa Lombarda (Ravenna - Italy) with Crane WASP – WASP's brand new 3D printer in the construction sector - it represented a real challenge for 3D printing, maximizing the performance of a material among the oldest and at the same time among the most stimulating for the future of the green economy: the raw earth.

TECLA is in fact the peak of advanced research between matter and technology, it is the achievement of an unparalleled challenge that has brought the printing geometry to its physical limit. The project represents an unprecedented perspective for buildings and new settlements, in which the value of local raw materials is amplified by digital design. The double dome solution made it possible to cover at the same time the roles of structure, roof and external cladding, making the house high-performance on all aspects.

«From the shapeless earth to the earth as house shaped. Today we have the knowledge to build with no impact in a simple click. - says Massimo Moretti, WASP Founder - Technology is now at the human service and the home as a birthright is real.» 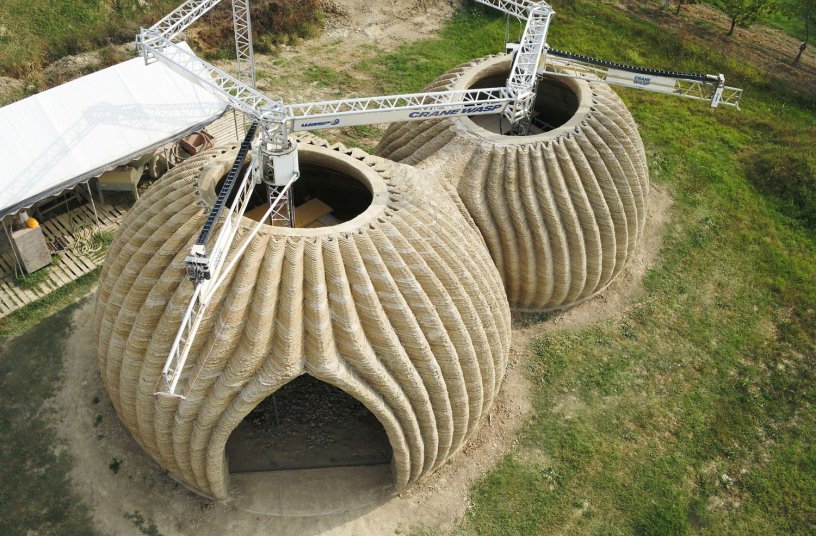 «The completion of the structure is an important milestone and shows that, thanks to the design and technologies used, TECLA is no longer just a theoretical idea but can be a real and achievable response to the needs of living today and the future, that can be declined in different contexts and latitudes», underlines Mario Cucinella, Founder of Mario Cucinella Architects and SOS - School of Sustainability.

Inspired by potter wasp, since 2012 WASP (World’s Advanced Saving Project) have been developing viable construction processes based on the principles of circular economy and digital fabrication. On the market since 2021, WASP produces 3D-printed houses in the shortest possible time and in the most sustainable way with the first multi-printer Crane WASP system, the company’s flagship of the construction line and the newco WASP On Site the company’s benchmark in architecture. Crane WASP is the world’s first modular and multilevel 3D printer designed to collaboratively build singular and even more extensive architectural works. The system is configured according to project needs and defines the structure of a safe and extremely efficient construction site. Each printer unit has a printing area of 50 square meters and therefore makes it possible to build independent living modules, of any shape, in a few days.

TECLA is the first eco-habitat built using, at the same time, multiple Crane WASP collaborative printers and it is the demonstration that 3D technology is able to create buildings by optimizing the construction process and minimizing the use of human and energy resources. The construction process can be replicated from time to time, thanks to the WASP Maker Economy Starter Kit, consisting of multiple 3D printers and a complex system of picking, mixing and pumping materials. For the first time in the world, two printing arms have been synchronized as part of a construction, thanks to software capable of optimizing movements, avoiding collisions and ensuring simultaneous operation. The WASP proprietary software used for TECLA is the synthesis of years of research that have led to the computerization of shapeless matter, managing to build the imaginable. TECLA can be synthesized in: 200 hours of printing, 7000 machine codes (G-code), 350 layers of 12 mm, 150 km of extrusion, 60 cubic meters of natural materials for an average consumption of less than 6 kW.

The final installation of TECLA and its presentation are scheduled for Spring 2021.

WASP exhibits 3D printed bio-building at the event "We Are Nature" by ...