In 1839, a group of German immigrants decided against settling in north-central Illinois on account of its swamps and black soil, and instead chose to put down roots further south in Effingham County, about 200 miles southwest of Chicago, taking advantage of its well-drained higher lands to establish the village of Teutopolis. But 150 years or so later, town residents learned there was something deeply unpleasant lurking just beneath the surface of the “City of the Teutons.”

By 2013 a pall had begun to hang over the facultative partial-mix lagoon system that had reliably treated the wastewater from the town’s 1,530 residents since 1976. This was despite the increasingly tighter legislation that the town had adopted to control pollutant discharges and the village was still in imminent risk of noncompliance. Fortunately, AquaTec, a Rockford, Illinois-based water and energy solutions provider came to the rescue with Tsurumi TRN submersible aerators.

Not so blue lagoon

Consisting of a three-cell lagoon arrangement in series, culminating in a lagoon bottom sand filter with 6 in of fine sand above an 18-in layer of graded gravel, the town’s wastewater system was designed to handle sewage flows of up to 200,000 gpd and hydraulic loading of 5 gpd/ft. This comfortably exceeded the daily average of 111,000 gpd and the 1.5 gpd/ft or so during the implementation period.

The lagoon system worked well, and aside from an increasing sludge build-up, it had provided adequate treatment. But in 2013 the state introduced discharge limits for ammonia and nitrogen, which insisted on a maximum of 1.0 mg/l in summer and 3.3 mg/l in winter. It soon became clear that these new limits would be unachievable for the town, especially during the winter, when cold temperatures inhibit nitrifying bacteria. Aeration and some mixing would be required to meet regulations, while also improving the levels of residual dissolved oxygen in the effluent. 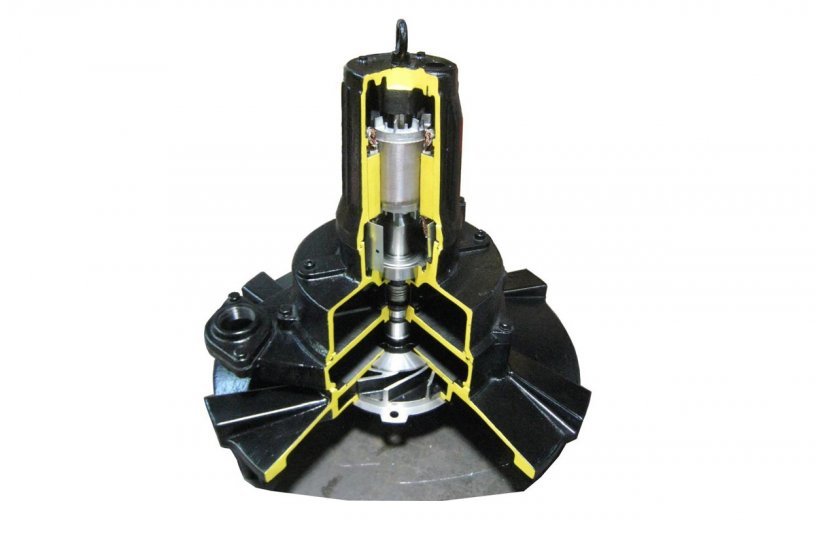 In an early attempt to improve the aerobic conditions, local workers installed eight floating, self-aspirating aerator units with the aim of gently mixing areas of the lagoon floor. Unfortunately, some aeration occurred within the first inches of the lagoon surface, but any mixing was extremely localized and virtually ineffective.

Municipal staff then performed a survey and discovered a 2-ft layer of accumulated sludge in certain areas throughout the lagoon, which was particularly troubling when the water depth varied from just 3 ft to 4 ft. Furthermore, residual oxygen was frequently too low to even measure.

“It seemed inevitable that we would need to initiate an immediate dredging of the lagoon,” said Jeff Strey, operations manager at AquaTec. “But after speaking with Carl Pals of the treatment plant, with all the expense and labor that had resulted from having to repair the floating aspirators several times per year, as well as the resulting loss of treatment during downtime, they were keen to avoid finding themselves in the same situation further down the line and decided to look for alternatives first.”

AquaTec and partner Vandevanter Engineering, were convinced that Tsurumi’s versatile TRN aerators would be the answer. These powerful, self-aspirating aerators are designed for trouble-free, long-life operation — all wear parts are stainless steel, and any component that comes into contact with water is manufactured from cast iron or stainless steel. The bearings and the oil bath around the shaft are both oversized.

As air is drawn in from above through the suction line, water flows in from below into the area around the rotor and both are intensively mixed, ensuring the water is uniformly oxygenated. Additionally, the air flow presses the water away from the impeller, forming an air cushion that prevents the shaft seal from touching water and substantially increasing its working life.

According to Strey, inspection of a cutaway TRN unit that highlighted its robust construction was enough to persuade the municipal staff to delay dredging until three 50TRN45.5 submersible aerators were given a chance to prove themselves.

These were then placed at the bottom of the lagoon, where they could produce a “bottom up” mixing of the settled sludge (i.e., a toroidal effect) with the aim of achieving three defined goals: reducing ammonia and nitrogen levels to within permitted limits; achieving required residual dissolved oxygen levels in effluent; and reducing sludge to extend the life of the lagoon system. 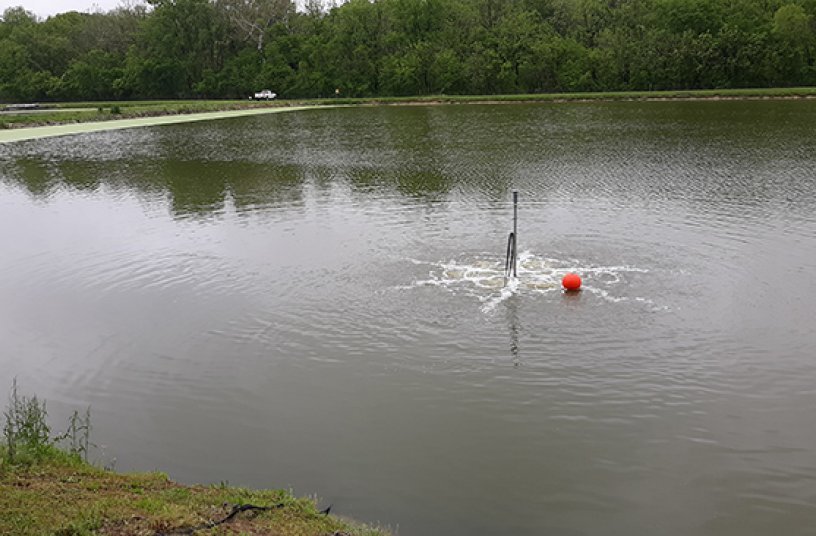 However, by the end of May 2020 — the same month in which the TRN units were installed — things were looking up. BOD5 effluent had decreased to 7.0 mg/l, despite the average BOD5 influent more than doubling to 84.8 mg/l. Similarly, although influent TSS had increased to 63.6 mg/l, effluent remained within discharge limits, despite the more aggressive mixing of years of accumulated sludge.

But, most crucially, with an almost tenfold reduction in ammonia/nitrogen discharge to an average of 1.88 mg/l, the treatment plant was finally on a path to meeting its permitted seasonal discharge limits. Residual dissolved oxygen could at last be routinely measured above the permit-required minimum of 5.0 mg/l, and often reached 7.0 mg/l, even in warm weather.

“Satellite images from before and after the deployment of our TRN aerators graphically show the curtailment of algae and weed growth due to nitrification of the ammonia present in the lagoon system,” Strey said. “By choosing a ‘bottom-up’ system, Teutopolis can avoid having to dredge its lagoons and also managed to easily achieve the minimum limit of 5mg/l residual dissolved oxygen. It could finally be assured of year-round BOD removal to comply with legislation.”