Three Vögele pavers have modernised Circuit Zandvoort in preparation for the Dutch Grand Prix. The project was very demanding since it included the addition of two steeply banked turns of up to 32%, requiring a tolerance of ±2 mm (0.79 in). So the contractors made full use of the intensive application consulting service provided by the Wirtgen Group experts.

180 degree bends and massive height differences: With its many hills and twists and turns, the approximately 4.2 kilometre long Circuit Zandvoort is a hugely challenging race track – not just for drivers, but for road construction professionals too. Before the return of Formula 1 to the circuit in September 2021 after a 36-year break, the “rollercoaster in the dunes” located right on the North Sea coast had to be partially rebuilt and renovated. Plans for the new layout included the partial construction of two new steeply banked turns along with accompanying rehabilitation and modernisation work. The two banked turns are designed to encourage overtaking and enable higher cornering speeds, so the race cars emerge faster onto the straight.

The demands on the road construction process were correspondingly high: Only special paving mixes meeting the highest standards of the World Motor Sport Federation FIA were allowed. The banked turns had to provide a crossfall of up to 32 %, keeping to a precision tolerance of ± 2 mm. Filippo Piccoli, technical manager of engineering firm Studio Dromo which planned the rebuild, describes the project requirements as “the most extreme race track construction I have ever seen and been involved with.” So the contractors, Van Kessel B. V. and KWS Infra B. V., both part of Royal VolkerWessels N. V., made full use of the comprehensive application consulting service and on-site support provided by the Wirtgen Group, as well as deploying the matching high-performance machinery: three Vögele SUPER 1900-3i pavers in combination with the AB 500 TV extending screed and Hamm rollers from the HW, HD, HD+ and HD CompactLine series. 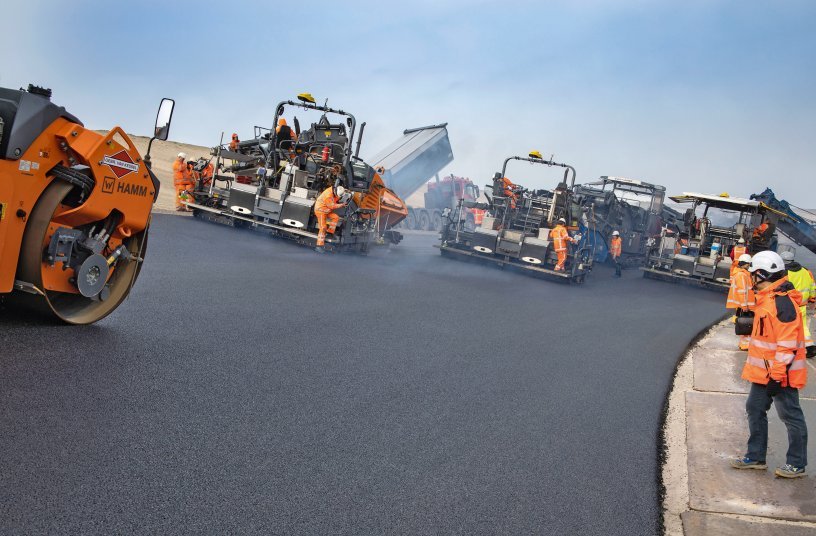 In preliminary discussions with the Wirtgen Group experts, the project parties decided to first run a trial. This allowed the paving team to work through the specific challenges on-site, ensuring that the actual paving operation on the track all went smoothly. Ultimately, the two banked turns were built with a crossfall of as much as 32%, making them even steeper than the corners on high-speed oval tracks in the USA. It was therefore important to the success of the project that everyone involved knew exactly what mattered while running the process, and what settings to make on the machines.

As is the standard requirement for race track construction, the paving was carried out using the hot-on-hot method, meaning with no central seam. André Felchner, head of application technology at Vögele, personally accompanied preparations and asphalt paving operations. “It’s for precisely these kinds of complex task that we are here. With such an extreme race track as this one, of course, there are a great many things to take into account to ensure that asphalt paving and compaction are successful,” says Felchner. “Which makes it all the better when you meet such competent and motivated paving teams as this one. The guys soon grasped what was important.” 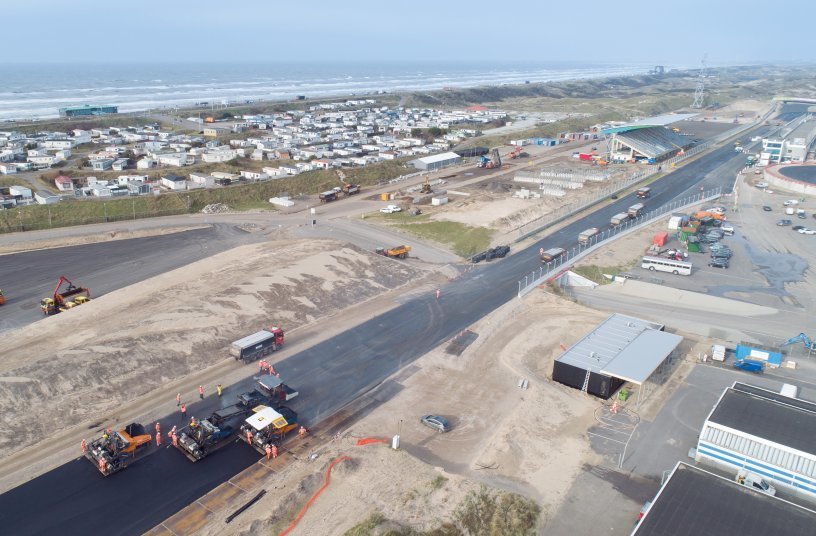 The tolerance of just ± 2 mm on the steeply banked turns posed a challenge. The three SUPER 1900-3i pavers had to deliver precision work, and were equipped with the Vögele Big MultiPlex Ski for the job. The sensor system is intended for jobs where absolute evenness in the longitudinal direction is essential. The paving team attached three multi-cell sonic sensors to its variable 5 to 13 m long beam. This enables the Big MultiPlex Ski to scan a reference at several points located a distance from one another. The Niveltronic Plus System for Automated Grade and Slope Control calculates a mean from the measurements taken across the entire measuring range, making up for any unevenness over extended distances.

Another special feature was the spectacular profile. Despite this, the Vögele machinery needed only minor adjustments in order to pave the steeply banked turns. “In order to achieve a high-quality, precompacted result at this extreme incline, we simply had to produce a slightly negative crown”, said Felchner. On banked turns, the pressure on the screed on the inside of the bend is naturally greater due to the slope. The paving team deployed the Screed Assist feature to ensure the mix was laid evenly across the entire width. On Vögele pavers, it can be adjusted separately for each side of the screed. This reduced the pressure on the inside of the bend, delivering a homogeneous paving result. “Everything worked as we had anticipated in cooperation with our partners from the Wirtgen Group. That makes us feel as if we can count on this kind of support when we next undertake a comparatively difficult project”, says Mark van Kessel, construction manager, Gebr. Van Kessel B. V.

Master of the bend