While upgrading the A3 Autobahn in northern Bavaria, the Steigerwald Süd service area was to be increased in size which involved extensive trenching work. Civil engineers, EIFFAGE Infra Bau SE and JOHANN BUNTE Bauunternehmung GmbH & Co KG rented a 42-ton excavator with a KEMROC EK 150 chain cutter attachment to carry out the work. Even at depths down to nine meters, the chain cutter worked its way through the compact sandstone with precision to the nearest centimetre. Despite working in such difficult geological conditions, consumable costs were kept within reasonable limits.

Upgrading the A3 Autobahn in northern Bavaria to a six-lane motorway is a mammoth project. The distance between autobahn exits Biebelried and Fürth/Erlangen is about 76 km. Two companies, EIFFAGE Infra Bau SE and JOHANN BUNTE Bauunternehmung GmbH & Co KG, joined together to form the joint venture A3 Nordbayern GmbH & Co KG as part of the PPP partnership responsible for construction, maintenance, management and partial financing of the project. Construction work started in May 2020 with a planned completion date of November 2025, a massive challenge for all concerned. 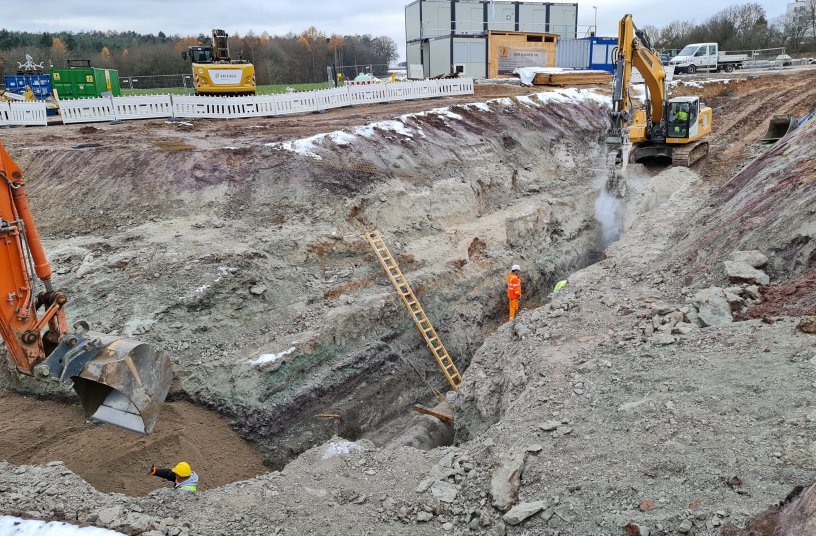 A large part of this major project and a challenge for the engineers at BAU ARGE A3 is the expansion of the fuelling and parking facilities at the Steigerwald Services. In the service area to the south of the motorway, the plan is to build 187 new parking places for trucks and 119 new parking places for cars. This involves relocating two existing communal roads. At this location, trenches had to be excavated in the hard shoulder for drainage. During the excavation work the contractors had to overcome difficult geological conditions which, thanks to site investigation work carried out beforehand, did not come as a complete surprise. Beneath the overburden and a layer of weathered material, there was a large expanse of solid sandstone. The contractor had to open a long trench through the sandstone to connect to a retaining basin. The trench depth could go down to 9 meters in sections due to the hilly nature of the terrain.

After detailed discussions with the manufacturer KEMROC and Carl Beutlhauser, a construction equipment dealer, it was decided to rent a 42-ton excavator with a KEMROC EK 150 chain cutter attachment to carry out this work. It was felt that this combination had the power for this demanding trenching project. Technicians from Beutlhauser Smart Systems added an innovative extra benefit to the package in the form of a GPS based excavator control system. Combining satellite location data together with data from a reference station on site, the position of the excavator attachment in both horizontal and vertical planes could be determined to an accuracy of one or two centimetres. Beutlhauser technicians calibrated the KEMROC chain cutter attachment data into the system and provided training for the excavator operators. 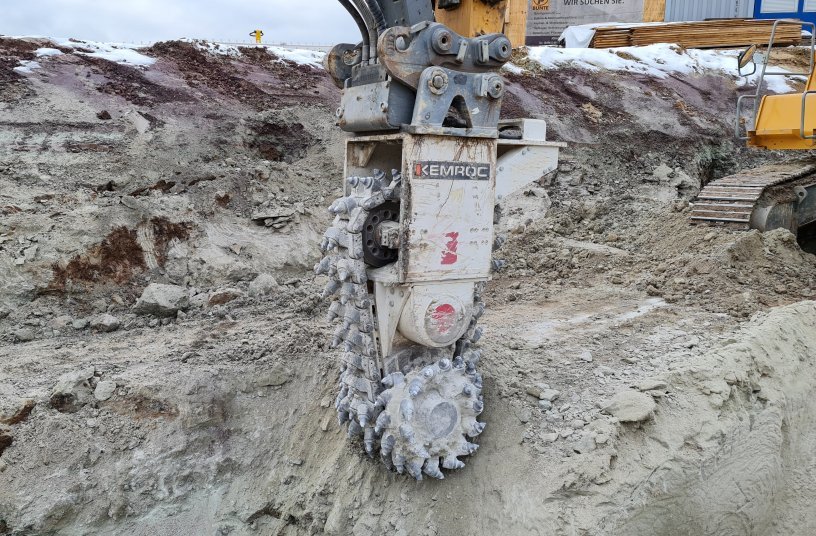 Trenching preparatory work started in October 2020 but it started in earnest with the chain cutter in November. Trenching proceeded in four steps. Guided by the information from the GPS control system, the operator excavated a section of trench about 2.5 m in length. Using a full hydraulic quick hitch, the operator then exchanged the chain cutter for a rock bucket to clean out the trench, depositing the spoil into a temporary storage area ready for use as backfill. A layer of concrete was poured into the bottom of the trench before placing and connecting a length of DN 900 reinforced concrete pipe. The trench was the backfilled.

A chain fitted with tungsten carbide tipped picks running between two cutter drums make KEMROC chain cutters unique. This allows them to excavate trenches to the required width with great accuracy. In contrast to conventional cutter attachments, the chain cutter does not leave a ridge of rock between the cutter drums that has to be removed by swinging the attachment from side to side. The Site Manager, Lukas Emmanouilidis from BUNTE expressed satisfaction with progress using the KEMROC chain cutter at the Steigerwald service area. “Of course, the production rate depends on the depth and strength of the rock and this can vary a lot”, he said, “but as an example, in a two-week period in November we completed 50 linear meters of trench which, in these geological conditions, is quite impressive.” Due to the cutting action of the cutter with the chain running through the centre, significant savings in time and money were made simply by avoiding excavating unnecessary material. The GPS control system also helped keeping the trench within the required parameters. “The grain size of most of the excavated material was small enough to be used directly for backfill”, he added. “Only a small amount of oversized material had to be crushed before it could be used.”