Possibly the largest retention basin in Austria is currently being built in Triestingtal (Lower Austria). Engineers at PORR were given the task of installing a diaphragm wall along the centre line of the dam during the construction phase. For this project it was decided to try a KSI injection attachment from the German manufacturer KEMROC. This modified excavator trenching tool digs into the ground, mixes the soil and injects a cement suspension into it. After hardening, what is left is a pressure resistant, impermeable soil cement structure closely connected to the adjacent rock.

In the future, when the Triesting, a river flowing through south-eastern Wienerwald in Lower Austria, floods again after heavy rains, as has so often happened in the past, people living around Fahrafeld in the district of Pottenstein should find themselves better protected from the flood waters. A massive water retention basin is being built there for this purpose. With a capacity of 725,000 m³, the basin is intended to protect the community and the infrastructure from those once in a 100-year flood event. The construction company PORR is currently building a dam, approximately ten meters high, to hold the flood water. The dam consists of two side sections about 1,300 m long with the basin located between the riverbed and railway lines. The sides are connected to one another with a transvers dam about 150 m long. The main structural element of the dam is a diaphragm wall made of a soil cement mixture which is firmly anchored into the solid rock below the dam.

Under the topsoil, the local geology consists of various layers of loose rock lying on a bed of compact limestone. To create a sturdy diaphragm wall in this material, the specialists at PORR decided to use equipment they had not tried before. They chose to use a KSI injection excavator attachment designed and manufactured by the German company KEMROC. The attachment has a long sword with a cutting chain that can grind its way down through the earth and rock. It can then mix the broken material with a cement suspension pumped via hoses from a semi-mobile mixing plant. When hardened, the soil cement mixture produces a dense, structurally sound, impermeable structure. 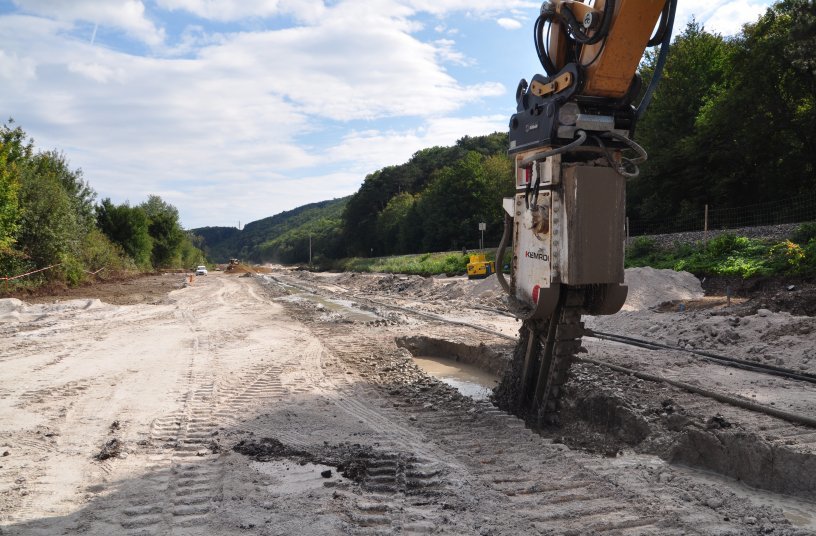 Site Manager for the PORR project on the river Triesting, Dipl. Eng. Martin Pühringer said, “At Fahrafeld we used a KSI 5000 attachment mounted on one of our 50-t standard excavators together with a control system that we developed ourselves to set the operating parameters and keep a record of the results. We record data on a continuous basis so we can create a report.”

Early October 2020, the civil engineering company PORR were halfway through the first phase of construction of the Fahrafeld retention basin in the Triesting valley. The southern section of the dam running alongside railway tracks had been completed together with the soil cement diaphragm wall which had been constructed using a large excavator with the KSI mixing attachment. Wear on the sword chain for the 1,300 m length of diaphragm wall was extremely low. Only 25 cutter teeth had to be replaced on the excavator attachment. “Such low levels of wear confirm that our choice of equipment was correct”, said David Görgl, Team Leader at PORR while discussing the results. “With other comparable soil mixing processes we would have experienced significantly greater consumable costs and the end product would not have been as good. We came across large boulders in the overburden over and over again. Mixing tools used in other equipment such as paddles, cutters or augers would fail in these conditions; the boulders would destroy them. When using a drilling system, the larger boulders cause the drill string to deviate resulting in weak sections and eventual leaks in the diaphragm wall. The cutting action of the KSI attachment works perfectly under these conditions, allowing us to create a good quality product with little wear on the equipment.” 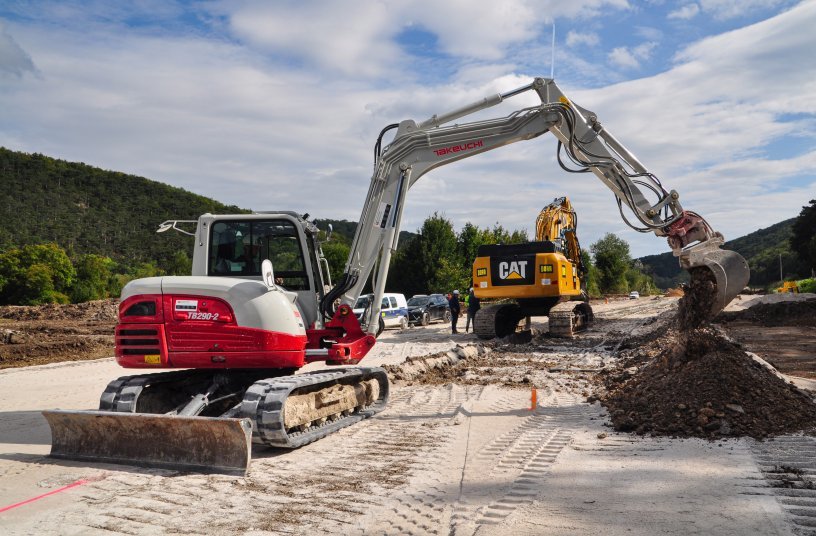 In conclusion, according to Team Leader David Görgl the KSI mixing attachment actually worked better than expected, “We achieved a high production rate while creating a diaphragm wall exactly to specification, so the attachment provided a favourable ratio in terms of performance to operating costs. Our conclusion after using the KSI attachment for the first time is that this is the preferred method to produce soil cement structures in difficult geological conditions.”

In the next phase of construction, the actual dam, which is about ten meters high, is being built up stage by stage. The soil cement diaphragm wall will then be installed while working from the top of the dam. It will connect to the existing diaphragm wall located in the overburden below. For this section, the big brother to the KSI 5000 will be used, namely the KSI 10000 with an impressive 10 m long mixing sword. PORR is confident that this machine from KEMROC will also perform satisfactorily when mounted on one of their excavators and provide a cost-effective alternative to other, more expensive civil engineering methods.