One of the largest gold deposits in the world is located on the volcanic island of Niolam, the main island in the Lihir archipelago of Papua New Guinea. The mine was discovered in 1982 and the sought-after precious metal has been extracted in open-cast mines for nearly 25 years – now reaching a depth of up to roughly 300 m below sea level. For a planned expansion of the mine, an impermeable protective wall is required around the new extraction area because of its close vicinity to the Pacific Ocean. According to the plans, a 1.8 km long cut-off wall will be constructed as part of a seepage barrier structure and will advance into the geothermally active foundation with temperatures of up to approx. 150°C at a depth of 60 m. This seepage barrier has two primary functions: Sealing off the new extraction area or open pit against ocean and ground water ingress by the cut-off wall and protecting the mine from immediate inrush of water to the open pit in the event of an extreme earthquake, causing liquefaction of foundation sediments and failure of the cut-off wall.

Due to the unique location of the mine in a geothermally active Lihir Island, Papua New Guinea, BAUER Engineering PNG Ltd., a subsidiary of BAUER Spezialtiefbau GmbH, was commissioned by the owner Lihir Gold Limited, a member of the Newcrest Mining Group, in collaboration with Klohn Crippen Berger (KCB), Newcrest’s seepage barrier cut-off wall design consultant, to execute two test cut-off wall elements with three diaphragm wall panels per element up to a depth of 55 m below the ground surface. “For the first time in the history of diaphragm wall construction, cut-off wall elements are being constructed in geothermally active foundation conditions with ground temperatures between 120 °C and 150 °C,” explains Gebhard Dausch, Project Manager at BAUER Engineering PNG Ltd. “Standard equipment combined with a unique slurry circulation system cooled by sea water was used for the work – without customization or special technical protection of the Bauer equipment against the unprecedented high temperatures within the foundation.” 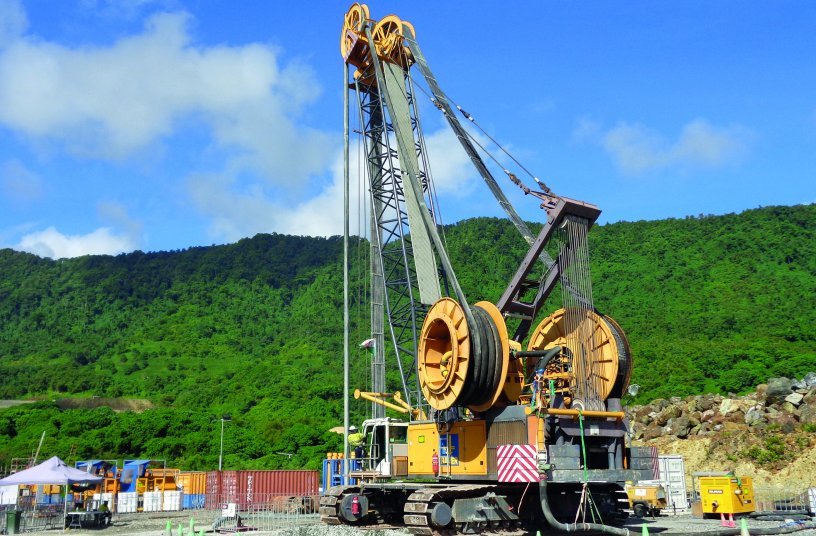 The work included the construction of a total of six diaphragm wall panels in two cut-off wall elements. All six panels were constructed through approx. 30–35 m of loose resp. blasted mine waste rock fill consisting of fine and course soil, gravels, cobbles and boulders up to 2–3 m in diameter, underlain by 15–20 m of marine sediments consisting of silt and sand as well as 5–10 m of highly altered – by high temperatures – of volcanic rock. Five panels were keyed into the volcanic soil strata at a depth of 55 m below the ground surface and one panel reached a depth of 60 m. To determine the temperature and electrical resistance in the concrete, reinforcement cages with temperature sensors and multi-ring electrodes were lifted into the cut-off wall elements. A grouted body was also constructed around the diaphragm wall by means of pre-treatment grouting to prevent slurry loss and trench collapse of the panels, and a -plastic concrete specified by KCB with a high temperature resistance was used. A BAUER MC 128 duty-cycle crane with BC 30 cutter unit, an MC 96 duty-cycle crane with grab unit and a BAUER BG 45 drilling rig with double-walled casing are being used for this work. During the diaphragm wall works, a special cooling unit developed for oil drilling is used along with the usual equipment. The heated bentonite flows through this mud cooler, thereby cooling back down to ambient temperature.

“The execution of diaphragm wall works in hot ground conditions poses an extreme challenge and represents a new innovation in the field of specialist foundation engineering,” continues Gebhard Dausch. “No one could predict the temperature development and its influence on the equipment in advance. The advantages of combining cutter technology with the unique properties of the bentonite suspension only became apparent when carrying out the works.” The work process speaks for itself: The hot soil resp. rock cuttings are taken up into the cutter box then conveyed together with the bentonite suspension to the desanding plant, so that the bentonite suspension provides both cooling and insulation. Thanks to the addition of fresh bentonite in the trench, the slurry flowing down to the cutter cools the diaphragm wall panel. Even after reaching the final depth, the constructed diaphragm wall panel only heats up very slowly, making it possible to carry out installation of the reinforcement cage and the subsequent concreting works without significant risk for the employees.

Work by BAUER Engineering PNG Ltd. began in September 2020 and is expected to conclude in April 2021.

Herbert Hoover Dike: Bauer has been commissioned for another construction phase