Elecaustro S.A., which is based in Cuenca, Ecuador, was commissioned to plan and construct the country’s largest wind farm in Loja Province: The wind farm called Minas de Huascachaca comprises 14 wind turbines with a total installed capacity of 50 MW. The contract to transport the turbines was awarded to the Colombian special transport and lifting company Transportes Montejo. Among much else, Montejo’s modern fleet includes a Goldhofer FTV 550 blade lifter, which comes with a load moment of 550 mt. That makes it the ideal solution for the transportation of long and heavy wind turbine blades of the latest generation with a rotor diameter of up to 3.4 m. The great advantage of these blade lifter is that the blades can be freely rotated around their own axis in order to keep them out of the wind during transportation. Also, the blades can be angled as required up to a maximum angle of 60° to pass over or under obstacles. This is the key to enormous savings as it minimizes the need to remove or make changes to the roadside infrastructure. With the bladelifter FTV 550 mounted on a Goldhofer THP/SL heavy-duty module, Transportes Montejo was able to transport the 73 m long blades for a 4 MW Dongfang wind turbine up the winding road leading to the construction site on a mountain plateau in the Andes mountain region. In such mountainous terrain, the Goldhofer FTV blade lifter gave a convincing demonstration of its capabilities, with the Transportes Montejo crew skillfully raising and turning the blades to avoid contact with the steep slopes as the combination made its way up to the pass. 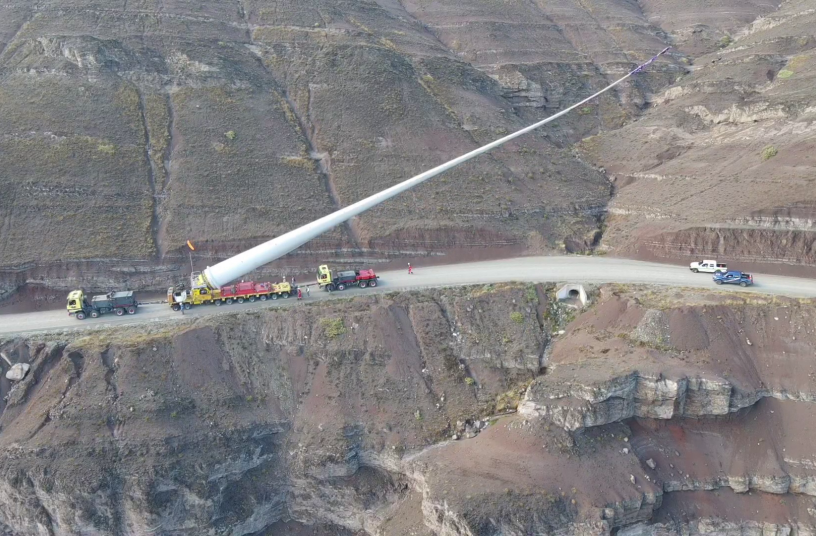 Founded in 1999, Elecaustro is active in the field of renewable energy. The company makes a significant contribution to Ecuador’s electricity supply, with capital investments focused on thermal power plants, hydropower and wind energy.

Elecaustro’s current wind power project is the wind farm called Minas de Huascachaca, which is located on a mountain plateau in the Province of Loja. With its 14 wind turbines, the 50 MW wind farm will be able to supply 90,000 households with electricity.

Transportes Montejo, a heavy lift and haulage company that is now in the second generation, is headquartered in Tocancipá Cundinamarca, Colombia, and also has a number of offices in Colombia, Panama, Ecuador and Venezuela with over 60 years of experience, Transportes Montejo is the national market leader in the field of special transportation. These experts in overland and multimodal transportation operate an impressive fleet of Goldhofer vehicles and equipment, including 180 THP/SL heavy-duty modules, 2 PST/SL-E self-propelled transporters with 26 axles with electronic multiway steering, 16 flatbed semi-trailers for transporting wind turbine blades, and various accessories like the FTV 550 blade lifter featured above.

Getting the power into the grid

Mammoet on the road in Texas