HVO as an alternative fuel at Liebherr

Cleaner drive concepts for vehicles and machines are becoming more important than ever in order to reduce CO2 emissions. Hydrotreated Vegetable Oil (HVO) play an important role at Liebherr. HVO is an alternative fuel which can now be used in the majority of the Liebherr construction machines, cranes and mining equipment in pure form or in addition to fossil diesel.

The wide product range of the Liebherr Group with the diverse applications presents Liebherr with the challenge of what drive concept can be used for what application. Maximum performance should be associated with the greatest possible environmental compatibility. Sustainable, synthetic fuels play an increasingly important role at Liebherr. They also include HVO, the first commercially available fuel with which combustion engines can be operated with a virtually neutral impact on the climate. Many machines of the Liebherr Group with Liebherr engines can now work all over the world largely on a climate-neutral basis.

When working on new drive concepts Liebherr relies on HVO, among others, as an alternative fuel. Its manufacture is climate-neutral if electricity is solely generated from renewable energy sources. In addition, it generates fewer emissions during its use than a machine operated with fossil diesel fuel. This becomes clear in a comparison: During the life cycle of a product the greenhouse gas emissions can be lowered by up to 90% if the machine is fuelled with Neste MY Renewable Diesel (= HVO 100), from one of the key HVO suppliers of the Liebherr Group, instead of fossil diesel. This calculation for Neste MY Renewable Diesel is in accordance with the requirements of the EU Renewable Energy Directive II (2018/2001/EU). The particularly durable Liebherr machines, which are often used by customers for many years, do not have to be replaced or retrofitted. Instead, they can continue to work with HVO fuel immediately. 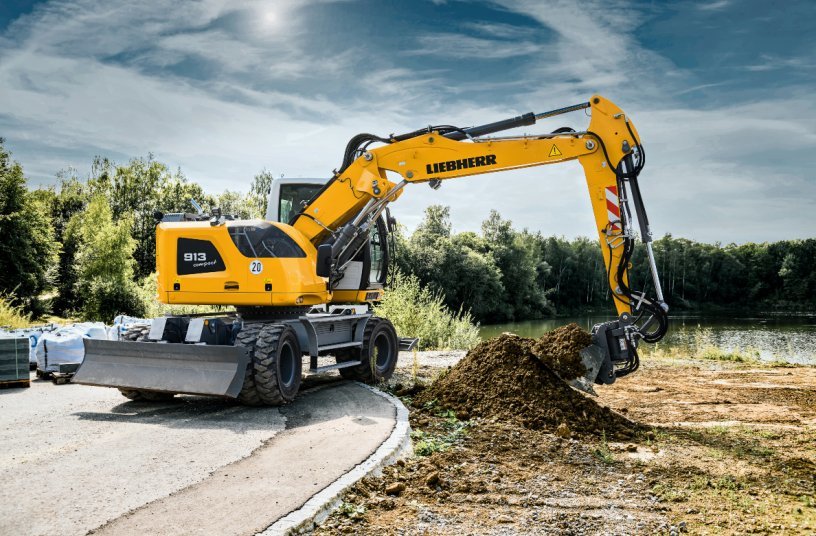 The Liebherr-Werk Ehingen GmbH has been fuelling its mobile and crawler cranes solely with pure HVO fuel since the start of September 2021. The changeover from fossil diesel to HVO applies to the crane acceptance and test drives as well as to the first fuelling before delivery. Furthermore, almost the entire factory transport in Ehingen has also been changed over to HVO. The Liebherr factory in Ehingen can make a significant contribution to climate protection in the future: With the changeover to HVO 2.5 million litres of fossil fuel and up to 6,500 tonnes of greenhouse gas are saved each year.

In Europe HVO is also experiencing a significant growth in demand in the area of maritime cargo handling, which is particularly noticeable in Great Britain and Scandinavian countries. All products of the Liebherr product segment Maritime Cranes can already be operated with HVO, a changeover from fossil fuel to HVO is planned for all factory applications as well as within the framework of the first fuelling and commissioning of the mobile harbour cranes for the start of 2022. Some of the initial key customers in the area of port equipment includes the port of Södertälje in Sweden, which operates a LHM 420 with HVO and thus pursues the objective of becoming a green port.

Also in the product segments Earthmoving and Material Handling Technology of the Liebherr Group HVO is used on the customer's request for emission-critical special applications. This happens particularly in areas with high environmental requirements, like for example in Scandinavia. The Liebherr-Hydraulikbagger GmbH in Kirchdorf a.d. Iller is the first factory of the segment to replace fossil fuel with HVO fuel from January 2022. In addition to the first fuelling of all new machines before delivery, in future this changeover will also apply to machine acceptances, demonstrations and validation applications in the factory. In addition, the factory transport is to be gradually converted to HVO fuel. All machines used in production such as forklift trucks will be gradually fuelled with HVO fuel in the future.

Alternative drives play a particularly big role in the mining industry. Also here HVO can already be used in the majority of the Liebherr mining products. However, comprehensive use of HVO is not realistic in this industry due to high energy requirements and the limited availability of the fuel in the near future.

Liebherr pursues an approach that is open to a variety of different new technologies when working on drive concepts. The company focuses on the energy conversion technologies available now and in the foreseeable future ("engines") and the suitable energy carriers ("fuels"). Some of the energy conversion technologies currently include electric motors, fuel cells, batteries, combustion engines or a combination in the form of a hybrid drive. The energy carriers include electrical energy, hydrogen, ammonia, e-fuels, methanol, biodiesel, fossil diesel - and HVO.

The manufacture and use of HVO is largely climate-neutral if only renewable energy sources are used. HVO is obtained from cooking oil waste, grease and fat residues, waste fats and vegetable oil. Then it is converted into hydrocarbons by the process of catalytic hydrogenation, i.e. the addition of hydrogen on intense heating. This in turn is an energy carrier and thus a potential fuel. To what extent HVO will also establish itself on the market in the long term depends primarily on how the global production volume of the fuel and the associated availability develop. Despite the significantly increasing production, HVO is only available extensively in a few countries in Europe. One thing is certain for Liebherr: HVO is only an environmentally compatible and socially acceptable solution if palm oils are not used in production and no rainforests are felled for acquiring new cultivation areas. The Liebherr Group together with its HVO suppliers make sure of this.