New additions to the Schwandner fleet: RA 2-110 and »BLADES« plus Interface

Harnessing wind power for energy generation is a success story, and the wind turbines of the latest generation are bigger than ever. In order to transport the increasingly long and heavy components quickly and safely to what are often remote destinations, P. Schwandner Logistik + Transport GmbH (Pfreimd) has added a number of new Goldhofer transportation solutions to its special vehicle fleet. That includes three »BLADES« trailers for the reliable transportation of turbine blades with a length of more than 80 meters. The hydraulically steerable trailing dollies are fitted with interface, a new hydraulic blade tip carrier certified by Vestas. To meet today’s increased requirements in terms of height, weight and safety when transporting ultra-heavy and voluminous tower components, the expert from the Upper Palatinate region will in future be placing its trust in Goldhofer’s further developed RA 2-110 tower adapter. With this combination, Schwandner is in compliance with the strict specifications of a safety concept for tower transportation co-developed and prescribed by Vestas Wind Energy A/S (Aarhus, Denmark), the world’s largest manufacturer of wind power solutions.

The larger the wind turbine, the more stable the supporting structure must be. In order to transport the heavy and voluminous tower sections, the Upper Palatinate-based oversized cargo transportation specialist has once again placed its trust in Goldhofer’s know-how: In future, Schwandner will be transporting tower sections with the new RA 2-110 tower adapters, which can handle tower sections with a weight of up to 110 tons and a diameter of up to 6.8 m. The extra payload comes from the combination of a front bogie in the form of a four-axle dolly with pendulum axles and a heavy-duty THP/SL-S (285) module as the trailing dolly.

This vehicle concept meets the additional safety requirements specified by the Danish wind turbine manufacturer Vestas. Instead of the usual configuration with two free-turning devices (gooseneck with bogie and trailing module), the new system has only one free-turning device, which is located between the front dolly and the tower adapter. The rear tower adapter is mounted directly on the heavy duty module. Compared with a completely free-turning solution, this concept gives the entire vehicle much greater lateral stability for greater safety, even at high tilt angles. 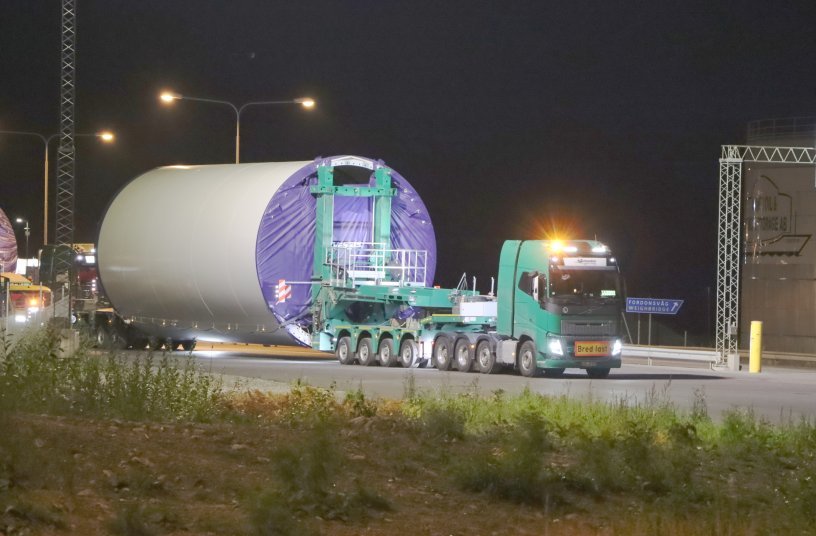 Schwandner has also added the new Goldhofer blade carriers by the name of »BLADES« to its fleet. They are designed to transport extra-long wind turbine blades, i.e. with a length of more than 80 m. This blade carrier solution is based on a self-tracking trailing dolly for enhanced maneuverability on challenging journeys and at higher speeds, resulting in greatly simplified route planning. To handle the higher weights of today’s turbine blades, Schwandner uses a combination of a two-axle front dolly and a four-axle trailing dolly with pneumatic suspension plus turntable and the Vestas hydraulic Interface. The Interface is located between the turntable and the Vestas friction clamp, which has been developed by Goldhofer especially for »BLADES« and has been certified by Vestas. This additional component serves to absorb the impacts of uneven surfaces on the route, thus minimizing the forces acting on the blades during transportation.

Since the wind turbine blade itself functions as a structural element within the system, »BLADES« offers significantly more ground clearance than extendable vehicles. “With this design, the blade simply passes over various obstacles, so that we can negotiate roundabouts and tight turns faster than before,” says Peter Schwandner. “In addition, lateral tilt in the blade is indicated on the vehicle itself and also shown on a display in the tractor unit. This is a major contribution to safety, one that we have not seen elsewhere.” In addition, the heavy haul expert benefits from the option of coupling the trailing dolly to the free-turning device when running empty. This configuration also makes the vehicle suitable for transporting various long loads, such as precast concrete elements. 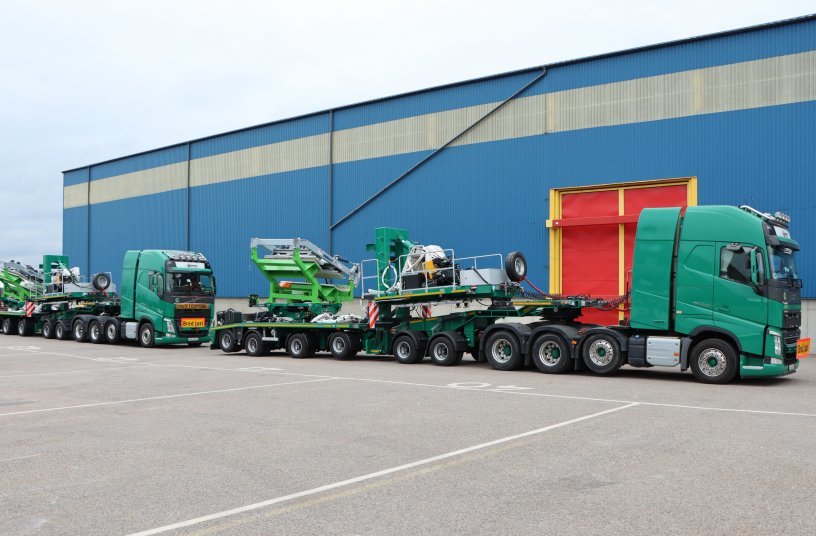 The new Goldhofer solutions for transporting wind turbine components have already proven their worth in a transportation operation performed by Schwandner for Vestas Wind Energy. The Danish market leader was awarded the contract by Stena Renewalbe AB (Stockholm) to build the Riskebo onshore wind farm (39 MW installed capacity) in Sweden with seven EnVentus V162 turbines, with a rated power of 5.6 MW each. With a blade length of around 80 m, this is the largest rotor size in the Vestas portfolio. It is designed for low to moderate wind speed sites, although the turbine also remains operational at high wind speeds. The wind farm is due to be commissioned before the end of 2021.

For Schwandner, the task was to transport tower sections and turbine blades from the port in Gävle to Hedemora, about 100 km inland. As some underpasses could not be used due to the 6.3 m diameter of the towers, the itinerary was divided into a northern route for the tower sections and a southern route for the blades. Once all the preparatory measures had been taken, such as temporary road construction over roundabouts, temporary sloping for high curbs, and the removal of traffic signs and traffic lights, the extra-long and voluminous components of the EnVentus turbines were transported to their destination in just a few days. With both the oversized tower sections and the very long rotor blades, the maneuverable Goldhofer vehicles negotiated underpasses, freeway exits and roundabouts without a hitch. Peter Schwandner: “Our strategy paid off in all respects: With the Goldhofer vehicles, we are ideally equipped for the safe and fast transportation of wind power components of the latest generation.” 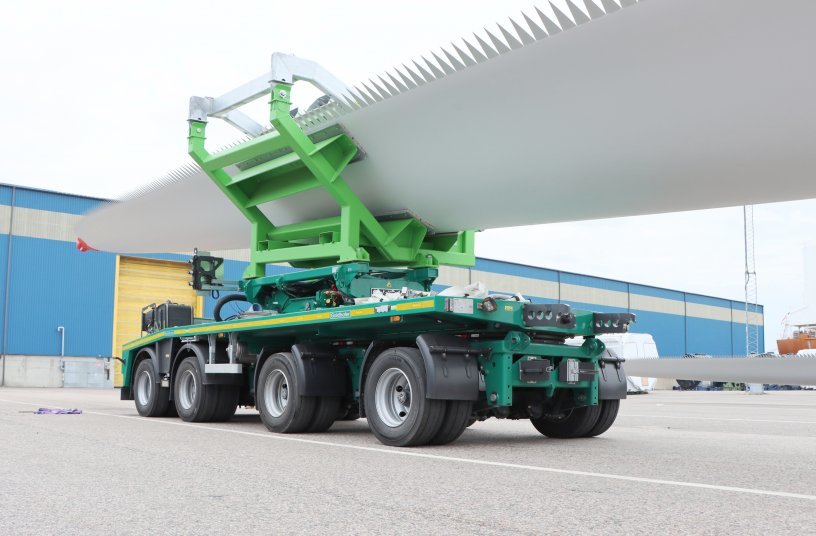 In view of the success of the Riskebo project and expected future demand for such vehicles, Peter Schwandner has already placed additional orders for Goldhofer’s wind turbine transportation solutions.

Flexibility is the key to heavy haulage