The good old milling machines are still around. Although no longer youngsters, and technically way behind the times, they are still raring to go and as reliable as when they were new. Day after day, an SF 1000 C, built in 1991 and owned by Borkowski GmbH in Langerwehe, proves that Wirtgen milling machines keep their promise of enduring quality – even after 30 years in service.

A sight for sore eyes

Everyone who sees the pristine paintwork and wonderful condition of this bright blue treasure when she rolls out of the company’s garage is absolutely amazed. In comparison with today’s ergonomically designed milling machines, this massive lump of steel has something of the rugged, almost unfinished, looks of a little, old-fashioned diesel locomotive. There’s no cabin roof, and no trace at all of assistance systems, cameras or high-tech equipment. Helmut Borkowski, an independent contractor since 1990, and the proud owner of this little gem, is used to hearing such reactions. ‘We once took the old girl to the Wirtgen plant, and everyone was called out of the workshops to see her. When we take her out on a job, people sometimes make fun of us when they see our SF 1000 C being rolled off her trailer. But she still does exactly what she was built for, and works just as well as she did 30 years ago.’

‘She’ll probably still be with us when we retire. And there’s no way we’re going to let her go.’ 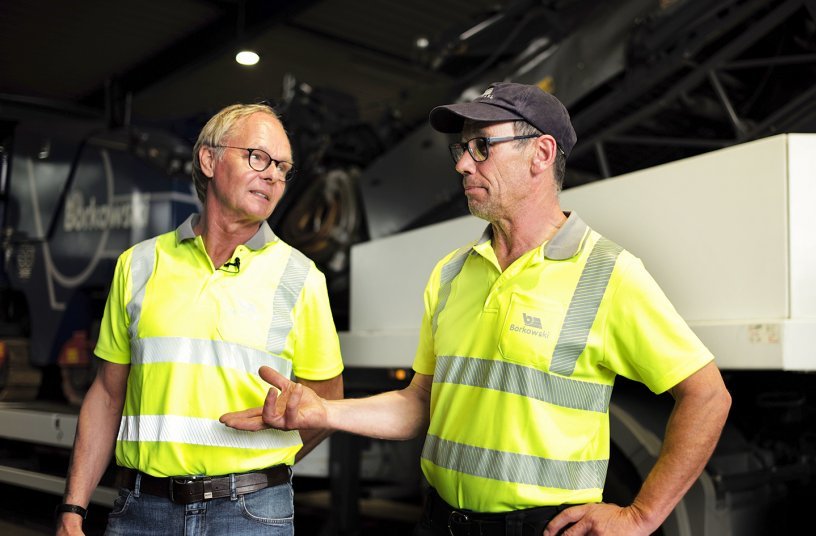 Borkowski’s first new machine – optimised for performance from the start

For Borkowski, the SF 1000 C was the first machine the only recently founded company bought new. ‘She was our main machine, and we worked her day and night’, recalls Helmut Borkowski. Since then, the machine has clocked up over 7,000 operating hours, and her absolute milling record was 3,200 m² in a single day – pretty impressive performance in the early 1990s. Today, the machine is primarily deployed on relatively small sites of around 300 to 400 square meters. Although her milling depth performance is no longer what it was (8 cm instead of 10), customers appreciate her manoeuvrability and speed and order her specifically for their projects. ‘Customers often say: bring out the old machine – you can take the conveyor off it and you can mill at a 90° angle to the direction of travel – you can’t do that with one of those big machines.’ In this respect, the SF 1000 C actually has a competitive edge over a modern W 50. 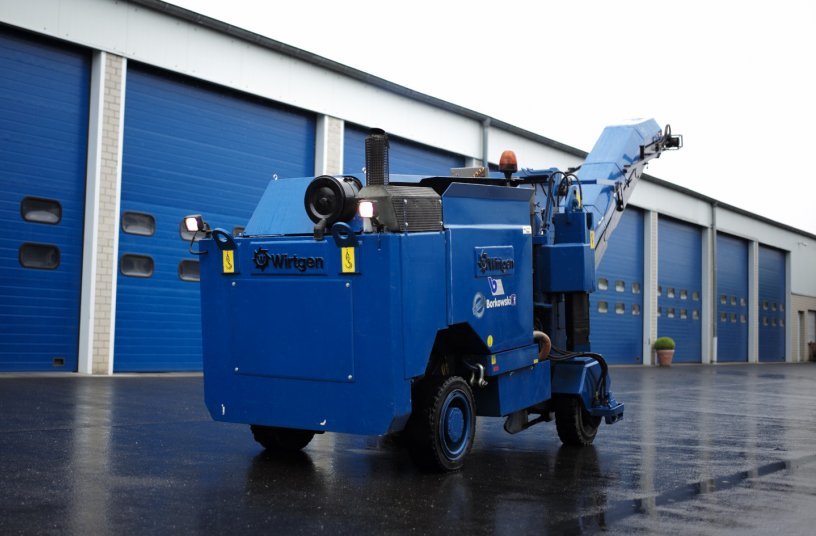 Not only Helmut Borkowski, but also his colleagues Marco Mosebach and Udo Lehwald have worked with and on the machine and look after her like the apple of their eyes. ‘She’s a real classic – if she was a car, she’d have to join a vintage car club’, says Marco Mosebach. ‘The first thing that catches your eye is the thin rim of her steering wheel. Although her responses are a little slow, there’s nothing electronic about her, so there’s a lot less that can go wrong. All she needs is an experienced operator with the right touch. You can actually feel what she needs.’ So it’s no wonder that the company’s three ‘old hands’ are the only ones allowed at her controls. ‘The old machine-operator adage still holds true’, says Marco with a smile. ‘Look at me and look at the milling drum, then you know who you’re dealing with.’

‘I can feel it when a couple of picks are broken. I don’t even need to take a look at the milling results.’

Marco Mosebach, with Borkowski GmbH since 1990 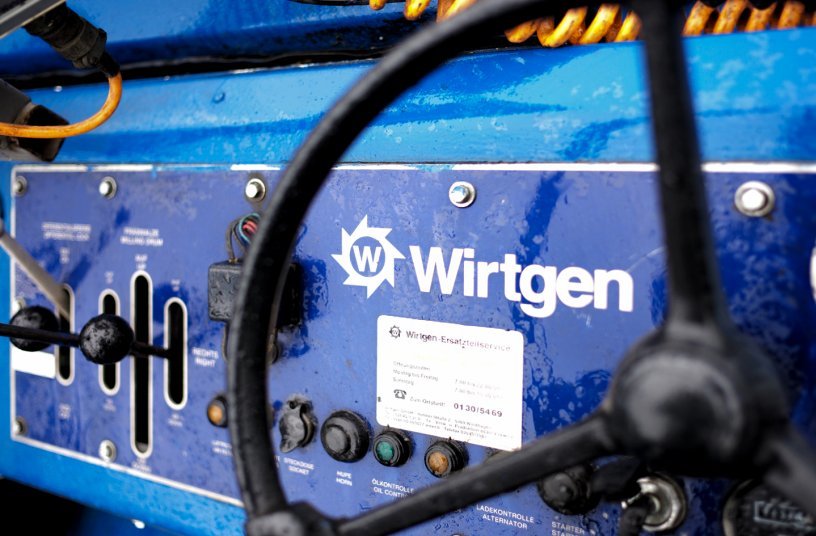 When man and machine work as a team for so many years, they are bound to experience a few bizarre situations. Udo Lehwald, who celebrated 30 years at the firm along with the machine early this year, recalls an emergency call-out to a snowbound motorway in the middle of the night. The fuel tank of a truck had burst, and gallons of diesel oil had spilled out and soaked into the road surface. ‘I wouldn’t have been able to make it there on my own, so a quickly rganized convoy of a snow plough, a road sweeper and a gritter cleared the way for me and the SF 1000 C from here to the scene of the incident.’ It all went well, and the machine showed her particular talents again. 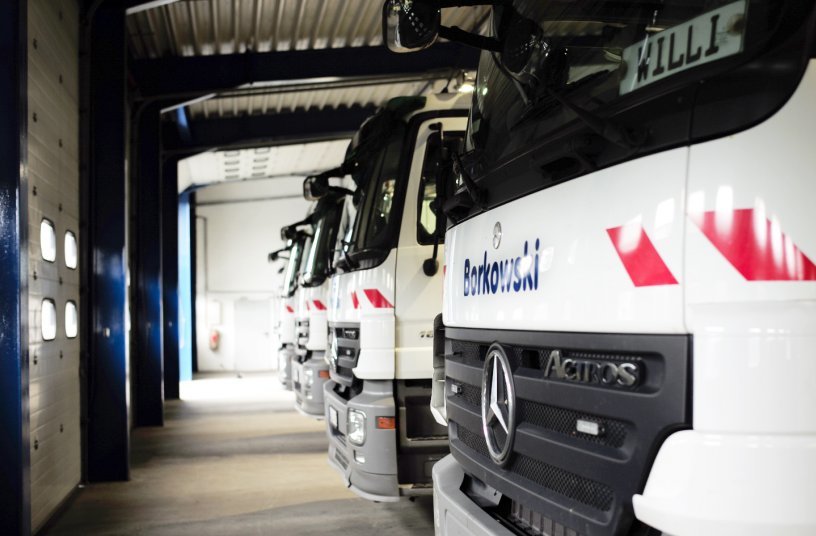 Always read to invest in upgrades

Since the beginning, Helmut Borkowski has always attached great importance to investing in the latest, high-quality features and equipment for his machines – and the SF 1000 C was not left out. When automatic pivoting of the right rear wheel became standard, the old milling machine was naturally on the list. Although the machine is not equipped with the latest dust extraction systems, Borkowski was one of the first to upgrade his entire fleet of front loaders with this cutting-edge technology. ‘Before we had it, taking a shower after work left the bathtub black with dust. Today, you don’t see a thing.’

Ingenuity is the name of the game

Whatever the job to be done on the old SF 1000 C, ingenuity and mechanical engineering skills were always indispensable. As a rule, repair work is carried out by Borkowski’s own technical staff – and they are never short of ideas about how to get things fixed: For instance, Borkowski’s team of makers and doers thought up, machined and welded on a sheet steel housing to protect the hydraulic hoses – and that was the end of hydraulic system failures. 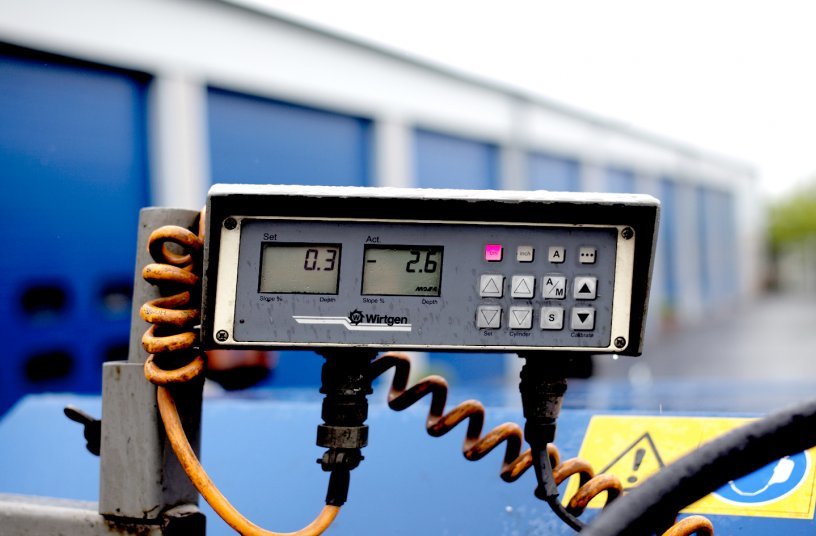 While we’re on the subject of breakdowns – of course we’ve had a few less serious issues like a cracked clutch disk or a broken chain, and we’ve had to replace the pump or an hydraulic hose every now and again. But we haven’t had a total breakdown at any time in the past 30 years, and the gearbox is the one that was fitted when we bought the machine in 1991. How come? Lots of TLC, only genuine Wirtgen spare parts, and the absolute dedication of our team when it comes to maintenance and repairs.

As qualified car mechanics and machine fitters, Marco and Udo know all the little ailments of their classic machine, and exactly what to do when they appear. It helps enormously that Wirtgen genuine spare parts are still available. And, in the rare case that they aren’t, as happened recently when the pump broke down, the Wirtgen service team checks the maintenance part, overhauls it and sends it back in no time at all.

Udo grins as he recalls an incident where a hydraulic hose ruptured during milling at night and left the SF 1000 C stranded across two tram tracks. Fortunately, he had a replacement hose in the toolbox, remained calm and collected in the hectic race to clear the tracks, and had the machine out of the way and working again in around 45 minutes. These days, if a machine breaks down on the project site, Wirtgen Spare Parts Service is on the spot almost right away.

‘That’s what I call great service. If anything goes wrong, the service people are there in a flash, do the repairs and are gone as quickly as they came. Nowadays, we don’t have to have a box of hoses or similar parts with us all the time.’ 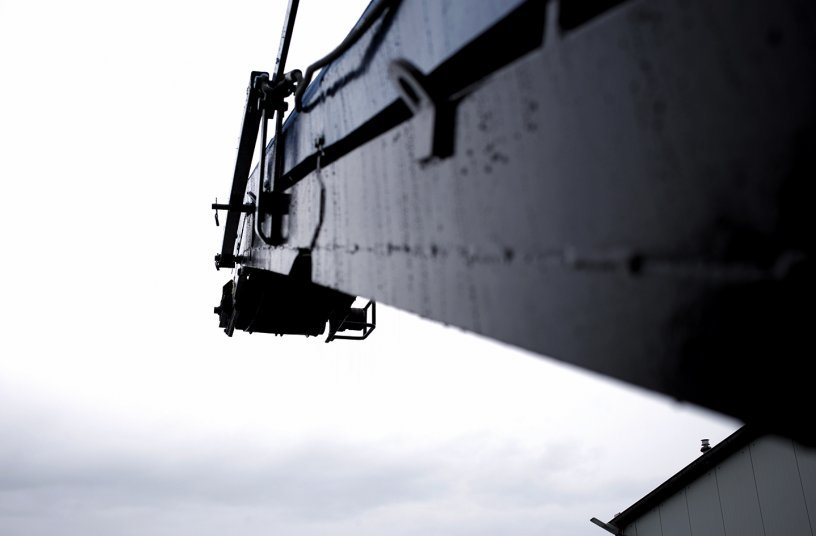 The relationship with the people in Windhagen is particularly close – everyone has known each other for decades, and there’s a great camaraderie. ‘Our deeply-rooted commitment to our customers also applies to our suppliers’, explains Helmut Borkowski. ‘This is why we arrange to meet them once a year to discuss the current situation, work out what could be better and how we can solve any problems there might be on both sides of the fence.’ Wirtgen also likes to use Borkowski’s milling machine fleet for on-site testing of the latest machines in real-world scenarios – a win-win situation for both the manufacturer and the customer. The SF 1000 C is a little too long in the tooth to be able to play a part in this – but she is still of particular interest to Wirtgen from the perspective of sustainability.

Nostalgia is all well and good, but the Borkowski team certainly appreciates the benefits of the latest generations of Wirtgen milling machines. ‘The most important thing’, says Helmut Borkowski, ‘is that the operator’s job is made easier with every new generation. The numerous different assistance systems make it easier and easier to deliver good results. The operator’s workplace is bigger and more clearly structured, the rear crawler unit is steerable and the hourly performance is higher.’ ‘Nevertheless’, says Marco, ‘I love to run a machine with old-fashioned, purely mechanical technology for a change – even though it’s not as comfortable or convenient.’

‘The new machines and new technologies are a dream come true. So good that it’s a delight to be in the driving seat.’ 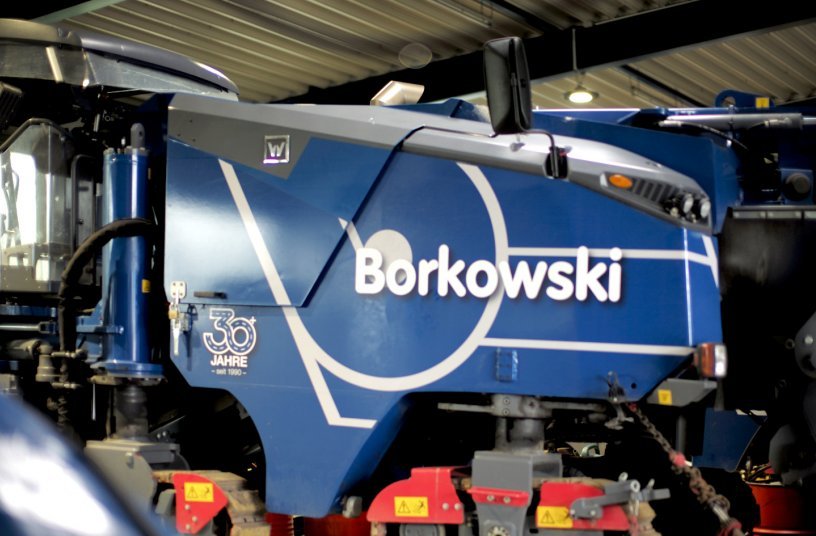 Borkowski’s ‘Blue Fleet’ – ready to take on any challenge

Borkowski has grown along with the Wirtgen Group portfolio – also because of increasing demands and tighter completion deadlines. The customer has a fleet of seven Wirtgen small milling machines, three Wirtgen compact milling machines, three Wirtgen large milling machines and a Vögele mobile feeder that are all in service and ready to go at any time. These days, the once common modifications are a thing of the past and more or less limited to changing the milling drums – and even that is now much easier, thanks to the quick-change system.

Today, the ‘Blue Fleet’ – incidentally a colour deliberately chosen to make Borkowski stand out from other contractors on the market – is a common sight on construction sites in North Rhine-Westphalia. Whether for pavement removal, profiling, surface rehabilitation, or cutting joints – the spectrum of applications is enormous. And, if you keep your eyes open, you might catch a glimpse of a classic milestone from the history of cold milling – a bright blue Wirtgen SF 1000 C. 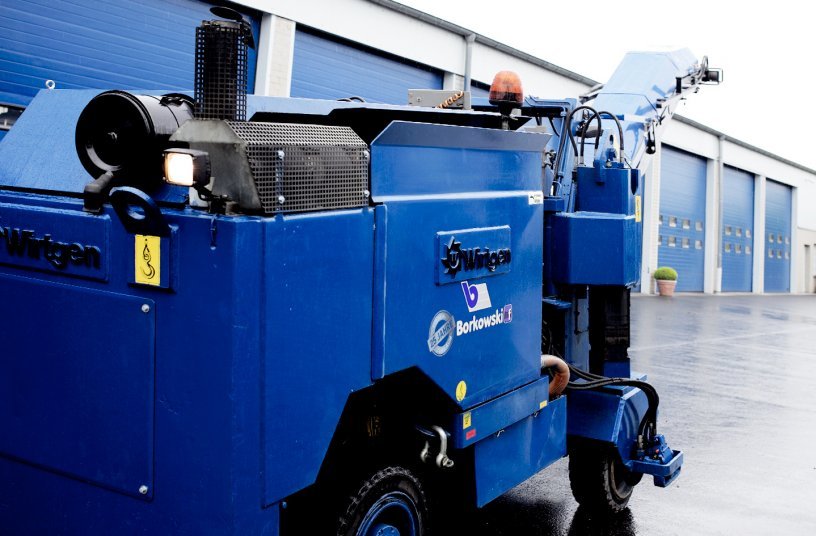 A Wirtgen Group machine train on a landfill construction pro-ject in the ...

A milestone for Nigeria – the Wirtgen Group and JBN work together to deliver ...