Since May 2018, a Grove GMK5150L has been in use in the precast parts assembly department of Austrian company HABAU Hoch- und Tiefbaugesellschaft m.b.H. – to the satisfaction of everyone.

“First and foremost, a crane has to lift reliably and work flawlessly so we can meet the tight schedules on construction sites. The GMK5150L was exactly the right choice for us; it’s our absolute allrounder!” stressed Walter Preisinger, head of prefabricated construction at HABAU. “The crane is a real class act.”

A look back shows the purchase decision was preceded by an intensive selection process. It became clear that a Grove – a new GMK5150L – should join the fleet for the first time during visits to the Manitowoc factory in Wilhelmshaven, Germany. Any reservations about the new crane and the manufacturer were quickly dispelled. During the factory tour, the HABAU team was particularly impressed by the modern production of Grove MEGAFORM booms. During the visit to the Product Verification Center, where the new Grove crane models are put through intensive test procedures, the team became convinced of the high quality standards.

Wilhelm Weinberger, head of prefabricated assembly at HABAU said: “We need to deploy our crane on both long-term construction sites and shifting assembly sites. That is why high load charts were important to us in the selection process, as well as the fact that the crane can travel on the road with a lot of ballast.”

The GMK5150L meets both requirements. With a capacity of 11.8 t on the 60 m main boom within a radius of up to 18 m, it is currently the most powerful crane in its class. In addition, it can travel with more than 10.2 t of counterweight.

“Thanks to the good advice we received from Manitowoc, we chose features that optimize the crane precisely for our needs. By equipping it with 14.00 tires on aluminum rims, we can carry the heavy-duty jib, the second winch, a three-sheave hook block and about 500 kg of crane accessories in addition to the 10.2 t of counterweight,” added Wilhelm Weinberger, going into detail about the crane’s configuration. This set-up of the all-terrain crane was officially weighed and approved for travelling on roads in Austria.

“Having our own 150 t crane, we can be much more flexible in planning our assembly activities. In the past, we had to rent those cranes – often with costly additional transport for the counterweight. Since the GMK5150L strengthened our company, we have been able to plan and complete significantly more jobs ourselves,” Wilhelm Weinberger said.

“In our day-to-day prefabricated assembly operations, a wide variety of elements must be moved – so the crane is regularly used to its maximum load capacity. The purchase of the GMK5150L has made us much more independent. A job handling the expansion of a large furniture store is a typical example of this. All columns, beams, wall and ceiling elements were lifted with the Grove all-terrain,” he added. 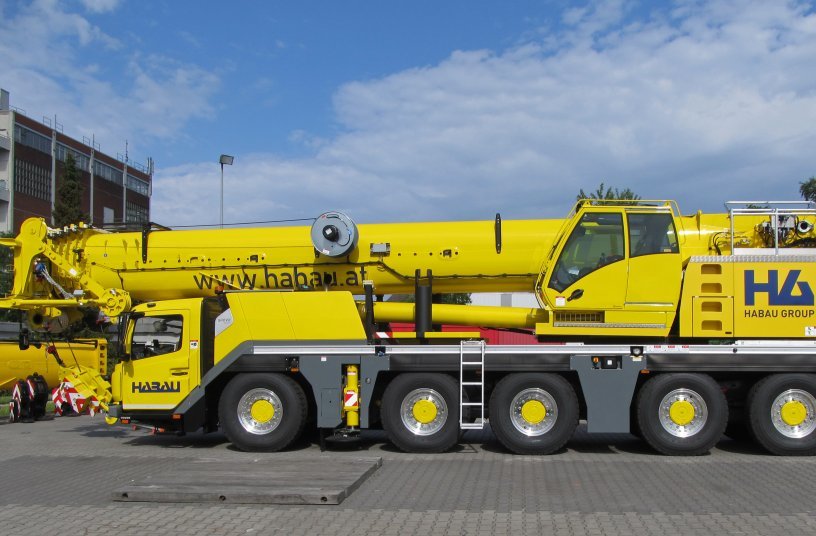 Crane operator Peter Kiehas is equally as happy with the Grove all-terrain. “The GMK5150L does its job reliably,” he said. “I can tell that Manitowoc looks after the operators and cranes even after we have left the factory and carries out upgrades on our GMK5150L without there being any specific reason at my end to do so. I now have a total of just under 3,000 hours on the clock and I simply feel comfortable working with the machine.”

The HABAU GROUP has its roots in a family business that still shapes the company culture and employs a total of 5,700 people. With a total annual construction volume of €1.6 million, it is among the top four players in the Austrian construction industry.