Maximum performance when it matters.

Road construction contractors often have to fulfill demanding requirements when building roads. But installing landfill liners is a much more challenging matter. Liners prevent environmental damage caused by water contaminated by seeping through deposited waste. In the course of an extension program, Joh. Wachenfeld GmbH & Co. KG permanently sealed the base of a landfill site for demolition of waste and contaminated soil in the north of the state of Hesse, Germany. Here, the team was ably supported by a team of high-performance machines from the Wirtgen Group and a John Deere motor grader. 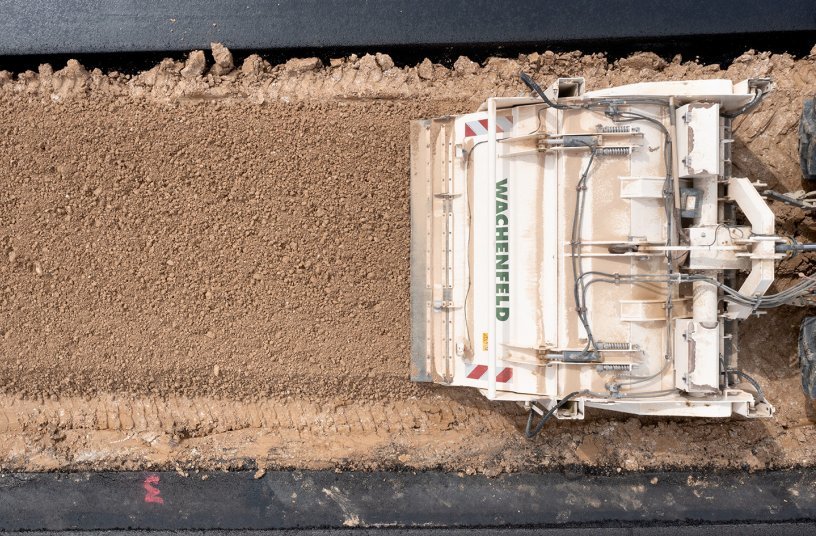 Challenging installation of a landfill liner over an area of more than 25,000 m²

The local authority’s own department, ‘Abfallentsorgung Kreis Kassel’ (Kassel District Waste Disposal), extended its landfill site with two new sectors. The site with an area of 26,400 m² has been earmarked for the deposition of demolition waste and contaminated soil. The contract for installing a landfill liner with a length of 330 m and a width of 80 m was awarded to Joh. Wachenfeld GmbH & Co. KG. The contractor from nearby Korbach had to fulfill a number of challenging requirements. For instance, the site was split into 13 separate strips. A layer of limestone gravel followed by four 25 cm layers of clay had to be placed on each of the strips.

Due to the vital importance of the sealing function of a landfill liner, the impermeability of every single strip had to be confirmed – by an independent engineering consultant and by the contractor. The liner was then finished with two layers of a specially-formulated landfill asphalt mix.

Optimal permanent sealing: the work on the landfill site near Kassel was demanding for both man and machine. 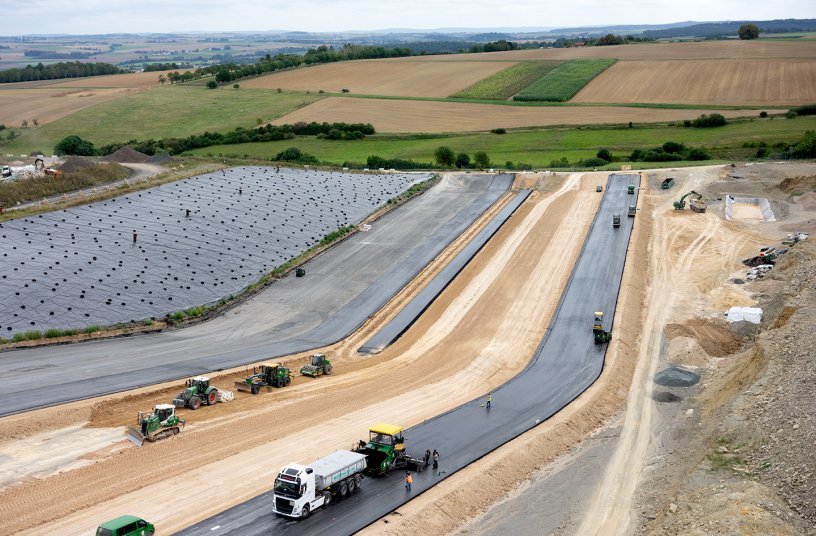 Placement of up to 1,200 t of clay-sand mixture per day – when the weather held out

The core element of the landfill liner is the four layers of clay with an overall thickness of 100 cm. Wachenfeld brought in truckloads of this material, a mixture of clay and sand, from an extraction site 50 km away. This meant that it took over an hour just getting it to the site. It was important that the clay shouldn’t get wet, so the site logistics had to be painstakingly organized. Even the morning dew had an influence on the processability of the material. And, if the material gets too dry, reworking is on the cards. So it was essential that none of the trucks got caught in the rain. Clay absorbs an enormous amount of water and, if it gets too wet, can hardly be worked with at all. Driving trucks down the steep sides of the site was also only possible when the ground was dry.

In turn, this meant that everything had to be perfectly coordinated when the weather was good to make the best use of the favorable time window and get the daily quota of 1,200 t of the clay-sand mixture in place. Above all, apart from the need for smooth and seamless site logistics, this also applied to the availability of the Wirtgen Group and John Deere construction equipment deployed on the project. ‘We’ve had nothing but a positive experience with their machines for many years. On challenging jobs like this, it’s also a great advantage that we get the machines and the service from the same people. We got in touch with our branch of the Wirtgen Group in Windhagen to give them a fair warning that we were starting the landfill job – just in case we might have needed their help in a hurry. But we couldn’t be happier, no problems at all, and the machines have been as good as gold’, said Michael Huthwelker, master of crafts in road construction at Wachenfeld.

The working schedule on the site was as follows: The material for each of the layers, both the limestone gravel and the clay-sand mixture for the next four layers, was unloaded on-site and spread with a bulldozer and a John Deere 622GP motor grader. The construction machines were assisted by a Topcon 3D-system with a total station to ensure precise compliance with the specified layer thicknesses.

Andreas Blankenberg, the machine operator at Wachenfeld, is already a big fan of his new equipment. 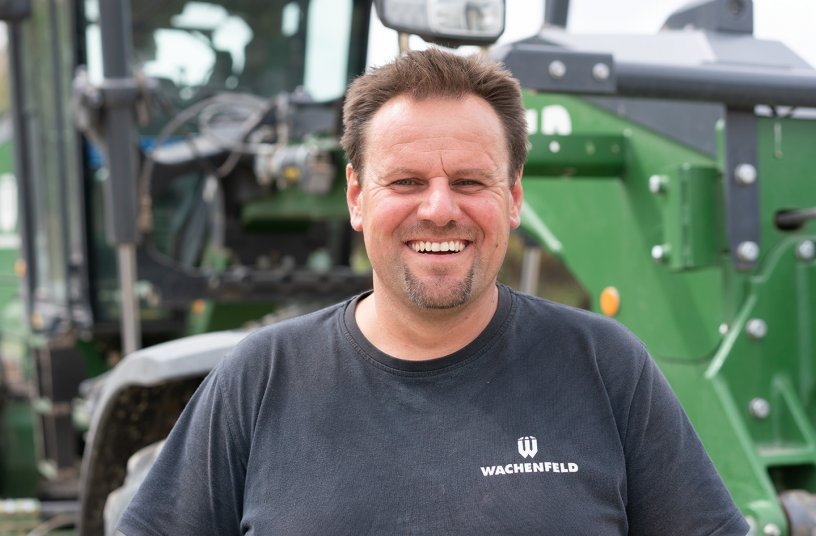 The treatment of the clay layers was by no means over after spreading. The next step was to loosen them up, aerate them and then compact them. The target here was the achievement of a Proctor density of 96%. For this, Wachenfeld employed a machine train made up of a Wirtgen tractor-towed stabilizer, a Hamm compactor with a padfoot drum and the John Deere motor grader.

First of all, the Wirtgen WS 250 tractor-towed stabilizer processed the previously spread clay. In contrast to its tasks on other projects, the machine used on the landfill site didn’t have to improve the ground with pre-spread lime or cement, as its only role here was that of a moisture management tool for the clay. The aeration of the clay by the milling and mixing rotor of the WS 250 played a decisive part in this. On completion of this step, a Hamm 3414 HT P compactor compacted the freshly homogenized layer. It enlarged the surface area with its padfoot drum – the P stands for Padfoot – to accelerate the evaporation of the moisture contained in the clay. The John Deere motor grader now took over and leveled the strip. Depending on the clay’s ‘fitness’ for processing – in other words, its moisture content – ground improvement was sometimes followed by first the motor grader and then the compactor. After an appropriate pause for drying, a further Hamm compactor with a smooth drum, a H 13i, then took care of the final compaction of the clay layers. Unless the rain set in – and, if it did, it was back to square one – and the process had to begin all over again with aeration by the tractor-towed stabilizer. 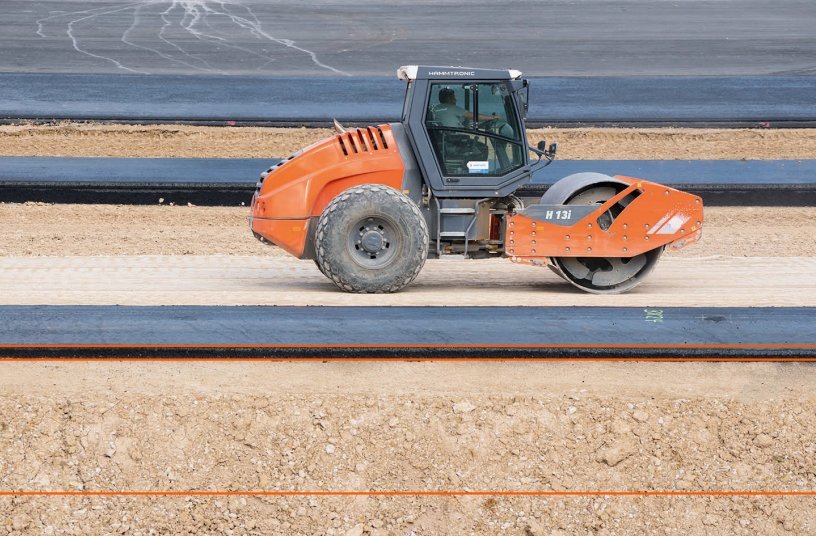 The machine train repeated this sequence of tasks for each of the four 25 cm clay layers. Thanks to high machine availability, a total of 52,800 t of clay were processed without any interruptions. 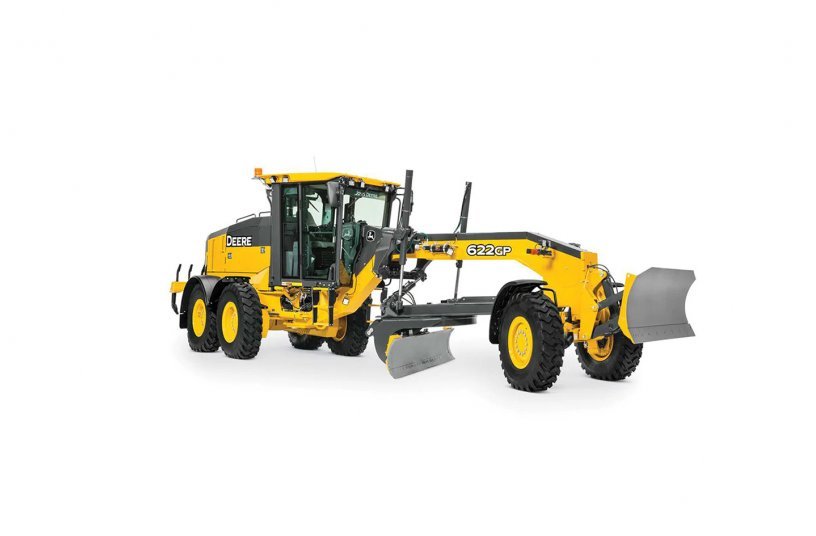 A special task and two asphalt layers for the Vögele pavers

A special aspect of landfill building projects is the construction of leachate drainage systems. Their task is to drain off contaminated water. At the landfill site in Kassel, the leachate drainage system consists of a massive asphalt block placed precisely at the center of the extension area by Vögele pavers. In this case, a SUPER 1800-2 paver with a fixed width Vögele screed placed an asphalt package in six layers with an overall thickness of 36 cm instead of clay. The run-off channel for the leachate was milled into this asphalt wedge.

A Vögele paver was also in use on the remaining part of the new landfill site extension. Finally, a SUPER 1800-3i with an AB 500 extending screed paved several layers of specially-formulated landfill asphalt over the clay package. Such mixes are characterized by a higher percentage of bitumen and more fines that provide particularly high impermeability. 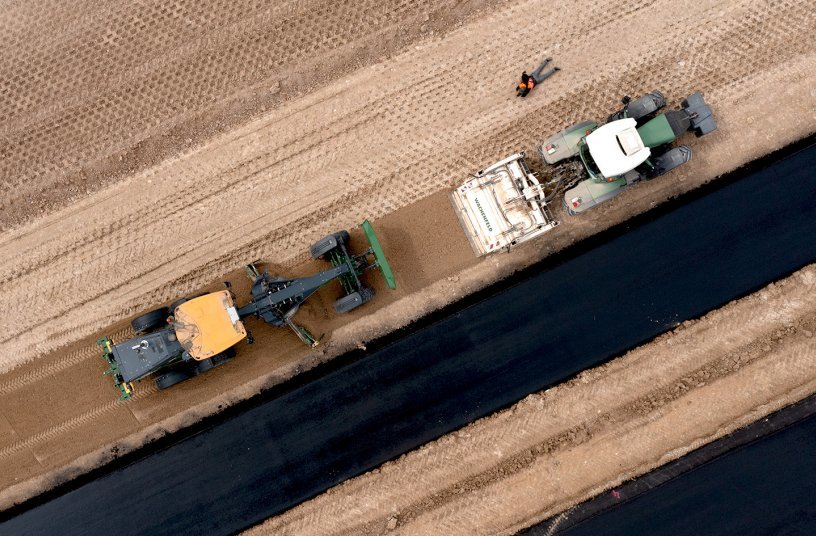 The excellently finished liner for the Kassel District landfill site promises an environmentally friendly future with no leakage of harmful leachate.

A milestone for Nigeria – the Wirtgen Group and JBN work together to deliver ...