With the Humboldt Forum, a centre of art, culture, science and education opened in the historic centre of Berlin in December 2020. PERI supplied a large quantity of economical formwork and scaffolding solutions from a single source for the reconstruction of the Berlin City Palace. In addition to this well thought-out overall solution, the project support provided by PERI engineers during construction ensured that all requirements were met and the construction schedule was adhered to.

Between the Brandenburg Gate and Alexanderplatz, close to the Museuminsel, the Humboldt University and the Berlin Cathedral, the reconstructed Humboldt Forum finds its place in the historical and cultural centre of Berlin. The most significant project is the reconstruction of the imperial city palace, which was heavily destroyed in 1945 and later completely demolished. In the post-war period, on the same site the GDR leadership built the Palace of the Republic, which was demolished due to high levels of asbestos contamination, thus making way for the reconstruction of the City Palace. 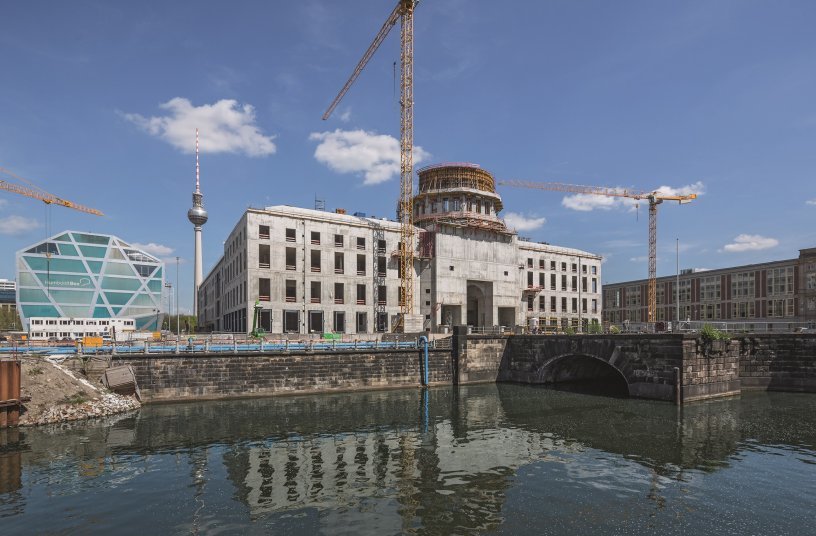 An architecture of contrasts

The architecture of the Humboldt Forum was designed by the Italian Franco Stella. It is characterised by contrasts – because in the reinterpretation of the Berlin Palace, traditional craftsmanship meets state-of-the-art technology and baroque meets architectural concrete. In the process, large parts of the original building were architecturally incorporated and combined with modern stylistic elements. The 180-metre long, 120-metre wide and 35-metre high outer shell, as well as the 70-metre high dome, shine in historical baroque, while inside a modern House of World Cultures is being built. As a museum, knowledge and meeting centre, the Humboldt Forum is dedicated to the dialogue between the cultures of the world and, in addition to international collections and works on the history of science, will also provide space for part of the Central and Regional Library. 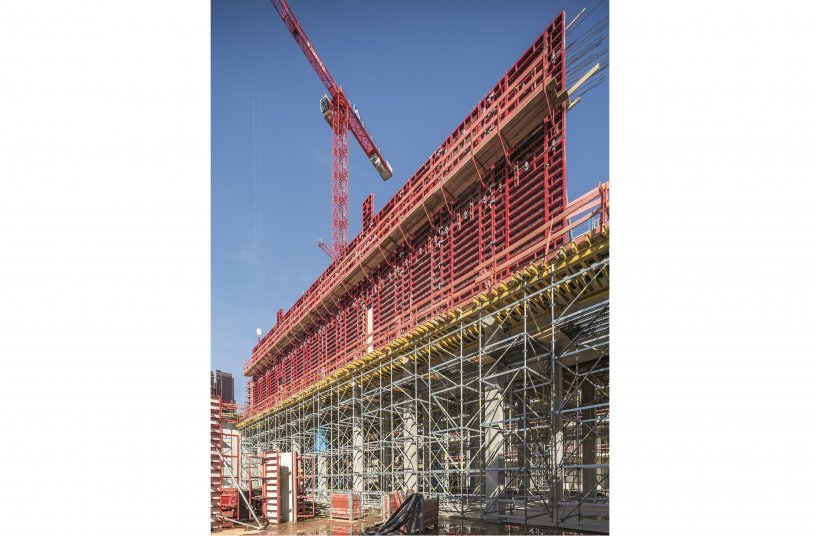 After the German Bundestag decided to rebuild the Berlin Palace as the Humboldt Forum back in 2002, former Federal President Joachim Gauck finally laid the foundation stone in 2013.

In order to achieve fast construction progress during the shell construction work, large quantities of PERI formwork and scaffolding materials were in daily use. Within a short time, a total of 85,000 m³ of concrete and 16,000 t of steel were used. In addition to the provision of modern and time-saving systems, the comprehensive consideration of all construction tasks in particular was an important part of the overall PERI solution. The well thought-out safety technology, the provision of project-specific assembled special formwork, the project management by the PERI project manager as well as the planning and supply of formwork and scaffolding from one source accelerated the construction process. 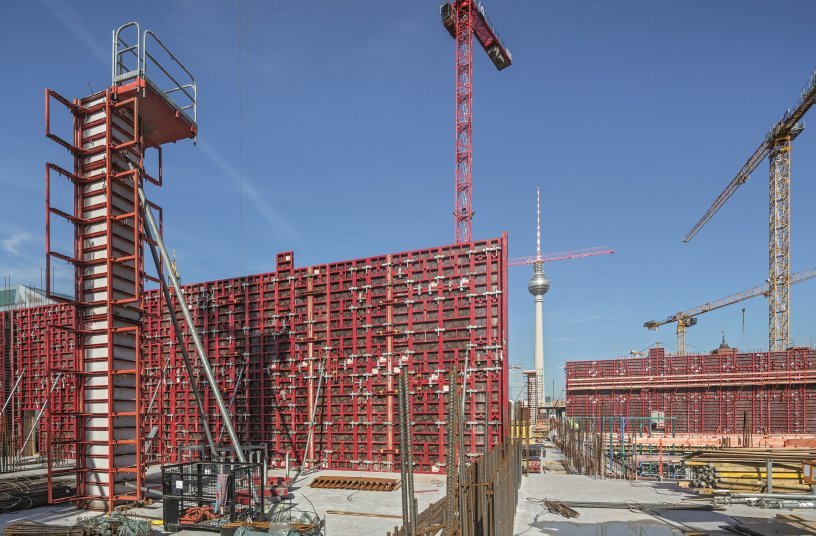 Over 6,000 m² of MAXIMO Panel Formwork were in use in Berlin at the same time. In particular, the one-sided MX Tie Technology guaranteed significant time savings during all shuttering and striking procedures. This is because MAXIMO does not require any spacer tubes or cones – and saves the expense of an extra person on the opposite side. The QUATTRO Column Formwork was repositioned cohesively as a complete unit with one crane lift, and the concreting platform and integrated ladder access with ladder cage also remained firmly attached to the formwork. 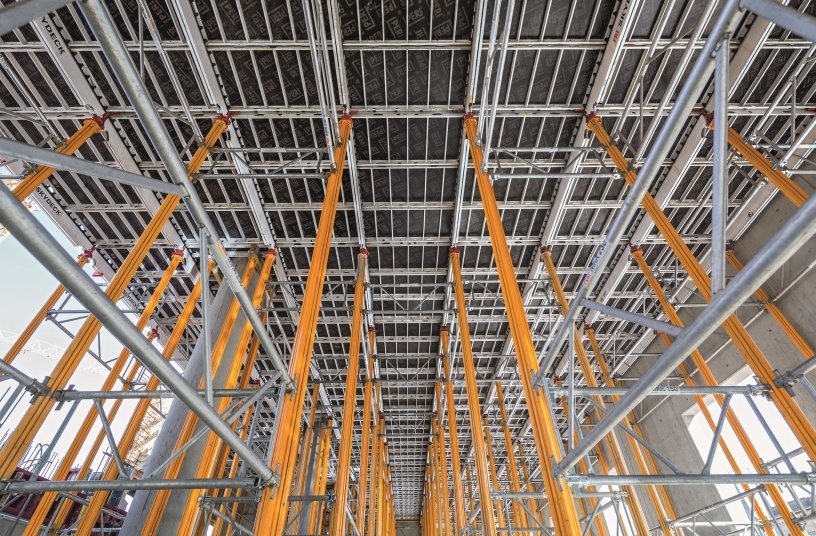 SKYDECK Panel Slab Formwork was used for the reinforced concrete slab formwork. A total of 10,000 m² of provided SKYDECK was systematically shuttered and struck. The users benefited from the low individual weight of the SKYDECK system components made of aluminium. In addition, the drophead system ensured rapid cycle sequences with reduced material use, which contributed significantly to adherence to the construction schedule. The panels and longitudinal beams were already free for the next cycle after one day. Support for large ceiling heights was provided by lightweight MULTIPROP Aluminium Props, which could be easily added to the shoring tower using MRK frames. 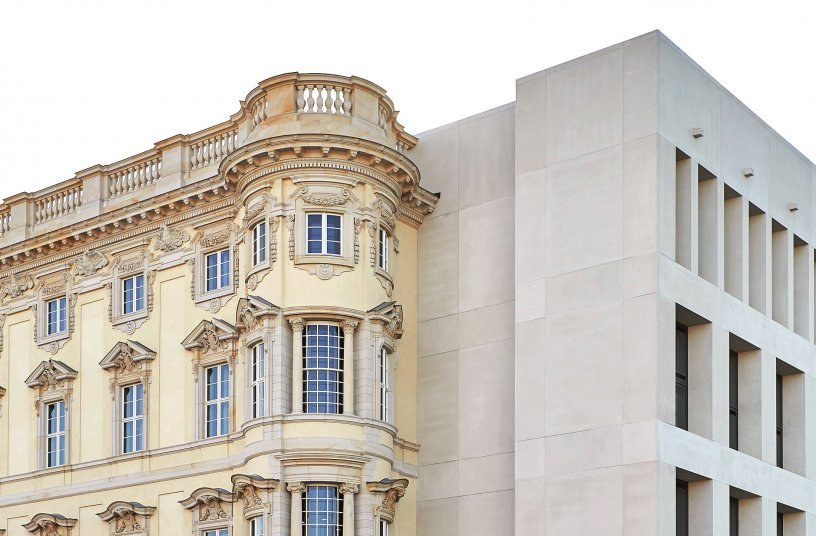 Due to the PERI solution with external CB Climbing Platforms, no facade scaffolding was required for the shell construction. In the area of the main portal on the west side, PERI Berlin also produced project-specific special formwork and delivered it to the construction site ready for use – planned and assembled to the exact dimensions, delivered on schedule and with maximum cost security for the project managers due to pre-defined fixed prices.

For the round reinforced concrete walls of the dome, RUNDFLEX Circular Wall Formwork was used together with FB 180 Folding Platforms. The final dome construction is carried out with the help of a PERI UP Shoring and Working Scaffold.