The new DX210-7, DX210NLC-7 and DX210LC-7 models offer a choice of short, long and narrow or long and wide track configurations, respectively. The new DX210-7 short track model is ideal for use on soft ground surfaces where lower ground pressure is required and is a compact unit offering advantages for working in confined spaces and for transportation. The DX210NLC-7 narrow track excavator is aimed at countries such as Italy, where either regulations or customer preferences call for the narrow track configuration, providing Doosan with another high performing option to offer customers in the 20 tonne sector. Perfect for rental companies, the new DX210LC-7 machine has a similar long track set-up to Doosan’s heavier DX235LC model. 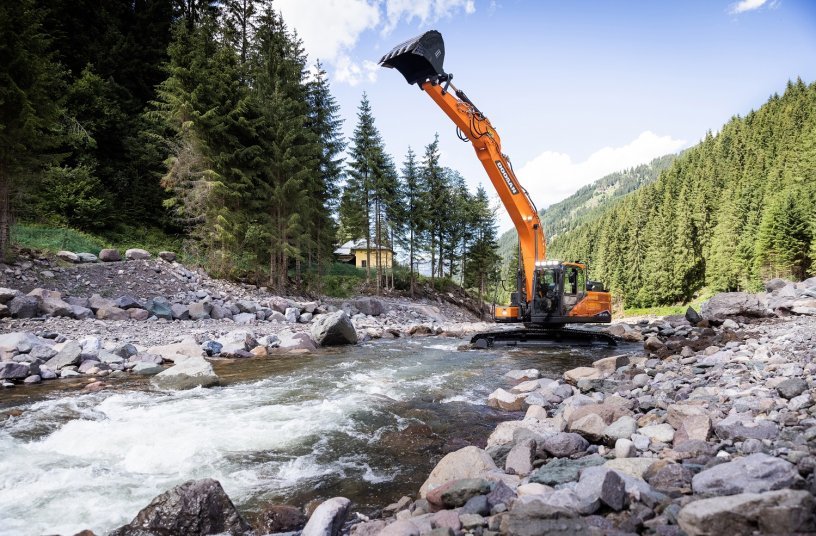 The new DX245NHD-7 25 tonne heavy duty crawler excavator is designed for the most abrasive of applications. Whilst it is a real 25 tonne excavator, the DX245NHD-7 incorporates 30 tonne class undercarriage components - the chains, rollers, sprocket and the chassis itself are oversized to increase the working lifetime of the machine, even on the toughest jobs.

The DX245NHD-7 adds a new highly sturdy option in the medium-sized range of crawler excavators from Doosan. With regard to the name of the machine, the ‘N’ stands for ‘Narrow Track’ and the ‘HD’ stands for ‘Heavy Duty’ illustrating its suitability for the most challenging applications. Complementing this, the ‘narrow’ design of the DX245NHD-7 offers the further advantage of a transportation width of only 2.54 m.

The new DX235LCR-7 reduced radius crawler excavator offers superior digging performance together with flexibility, convenience and low operating costs in a compact design with a minimum swing radius of just 2310 mm. The DX235LCR-7 meets increased demand for reduced radius machines for work near buildings and in confined areas.

The trend towards reduced radius machines has been driven by the space premium, particularly on inner city and urban construction sites and by the requirement in road and rail construction to keep adjacent lanes and tracks open while working alongside them. 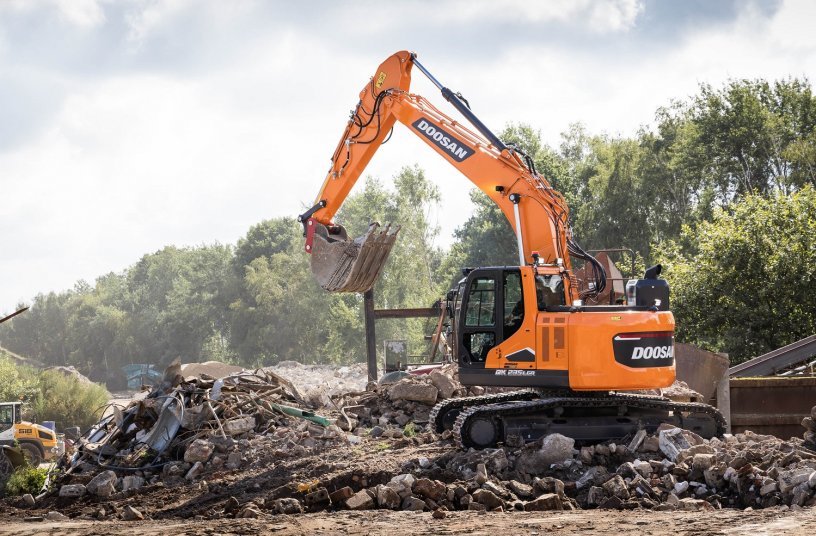 There is a new Tiltrotator Mode on the control panel in all of the new 20 tonne excavators, which can be selected to ensure an optimized hydraulic flow and helps to maximize the accuracy of tiltrotator work by eliminating back pressure. This new tiltrotator mode is a special two-way flow mode, but it is managed by the EPOS like a one way flow mode, with direct return to the tank in each direction, to avoid back pressure and increase flow and controllability.

In the DX245NHD-7, the new features include a heavy 5.0 tonne standard counterweight particularly suited for working with heavier attachments such as tiltrotators. The heavier counterweight also contributes to the higher lifting and digging capacities of the DX245NHD-7.

Despite its compact dimensions, the DX235LCR-7 offers outstanding lifting performance and is further enhanced by a new optional heavy counterweight, allowing the excavator to easily lift heavy objects such as pipes and large concrete blocks to meet a wide range of urban site requirements. Doosan has also updated the design of the standard and optional counterweights to provide greater service accessibility, ensuring maintenance work is as convenient as possible. As well as optimised stability and higher lifting capacities, the optional heavier counterweight is again particularly suited for working with heavier attachments such as tiltrotators. 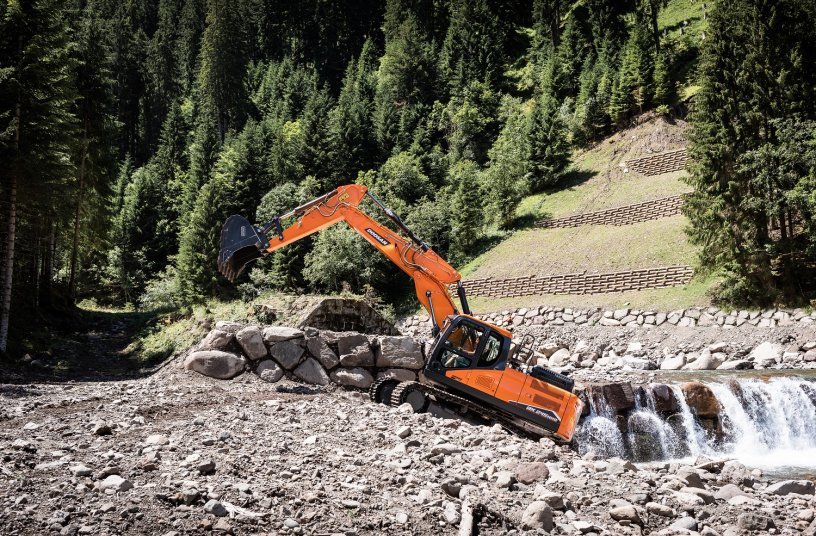 In common with the other models in Doosan’s new mid-range crawler and wheeled excavators, all five of the new 20 tonne models have a new smart hydraulic system that offers an improvement of around 30% in attachment work, compared to previous excavator models. The new system applies a smart hydraulic logic for optimal distribution of the hydraulic flow rate when both the arm and attachment are working simultaneously, with a new priority valve and an additional hydraulic line maintaining continuous hydraulic flow to the attachment, even when the arm is being used.

Another standard new feature is the Fine Swing function which minimizes the shaking that a lifted object undergoes at the start or stop of a swing movement with the excavator, to increase the safety of nearby workers and to prevent damage caused by the object falling from the excavator. When Fine Swing activates, the overrun disappears, allowing the excavators to smoothly reach maximum swing speed, whilst removing the shock from the turn reversal at the moment of stopping, resulting in a smooth stop.

The new excavators also incorporate as standard a new lifting eye that forms part of the casting for the push link for the bucket attachment at the end of the arm. The new lifting eye has a maximum capacity of 5 tonne and has a special bush insert to prevent deformation of the lifting hole. 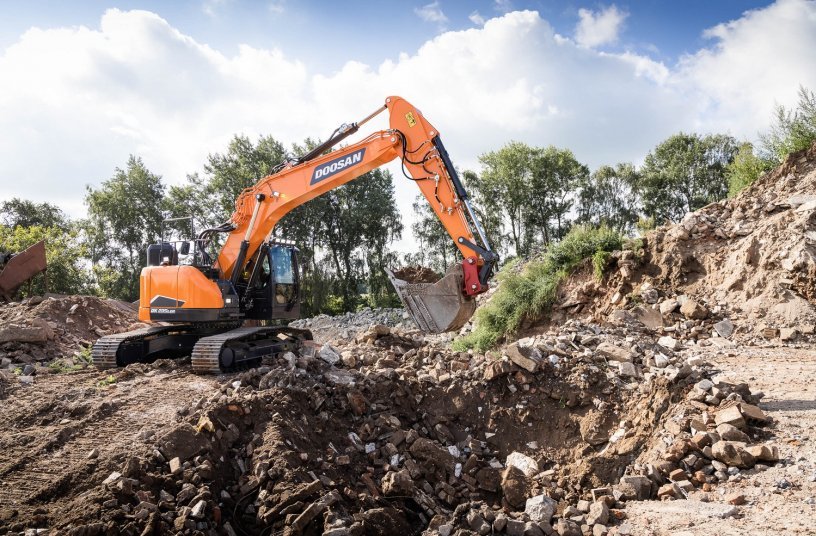 The DL06V engine offers a new solution to exceed Stage V regulations without exhaust gas recirculation (EGR), that boosts the quantity of air available during combustion, increasing the temperature of the process and greatly reducing the amount of particulates produced. This is combined with super-efficient DOC/DPF+SCR after-treatment technology to ensure minimal emissions. Thanks to the new technology, maintenance of the diesel particulate filter (DPF) has been greatly reduced, with no maintenance required until the machine has operated for 8000 hours.

The enhanced fuel efficiency of the DL06V engine in combination with a new hydraulic main valve and the new generation SPC3 Smart Power Controls provides increased fuel saving. There are four power modes (P+, P, S or E) now available on the new models, which help to simplify the operation of the new excavators and can be set in both one-way and two-way working modes.

In addition, the new DX210-7, DX210NLC-7 and DX210LC-7 models utilise the hydraulic system used on Doosan’s heavier DX225LC-5 model, ensuring the operator has the fastest possible response, precision and hydraulic capacity to carry out their work. 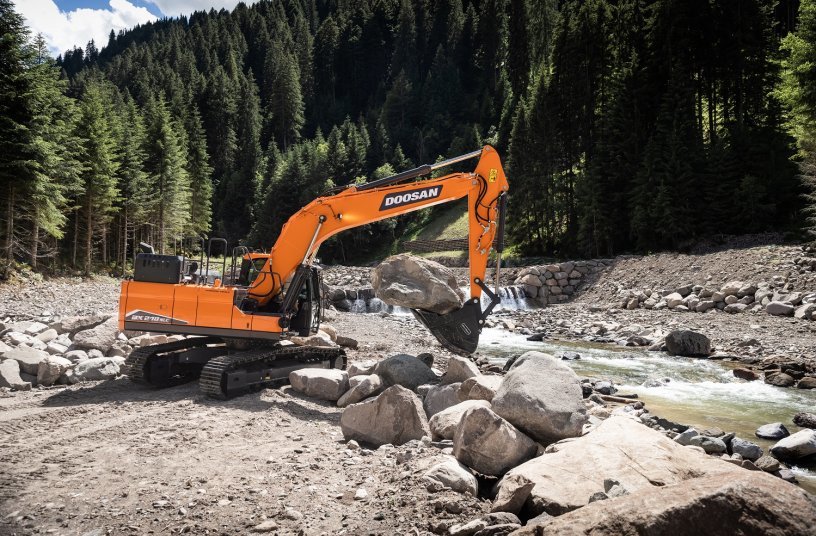 The state-of-the-art cab on the new excavators excels in terms of spaciousness and ergonomics, taking operator comfort and ease of operation to new levels. As well as a new high quality seat, the enhanced cab offers more features as standard than other machines on the market, ensuring super controllability and high precision in all applications.

Key new features in and around the cab:

•       Leatherette Heating Seat (Heating and Cooling as an option)

All of the new 20 tonne models are factory-installed as standard with Doosan’s state-of-the-art DoosanCONNECT wireless fleet monitoring system. The DoosanCONNECT system offers a web-based fleet management solution which is very useful for monitoring the performance and security of machines and promoting preventative maintenance. It is available as a standard feature on all new Doosan excavators (from 14 tonne), all new Doosan wheel loaders and Doosan ADTs.