FS 7.32 Compact, the first model of the Next Generation of Faresin telehandlers

Today the company from Veneto presented a preview of the FS 7.32 Compact, the first of the new FS range of Faresin Industries telehandlers.

Faresin has chosen to do so broadcasting in “Closed Room” mode from a hangar at the Breganze plant. A minimalist yet high-tech live video, entirely focused on the technical and functional contents of the new product.

A multi-voiced story that saw as its protagonist the FS project team led by the President Sante Faresin and by his daughters Silvia and Giulia, respectively Vice President and Operations Manager of Faresin Industries.

A true paradigm shift with an eye to the future, because the range was created ready for the integration of new developments in "IoT" technology, which is becoming increasingly strategic for fleet management and man-machine interaction on farms and construction sites.

FS 7.32 Compact was designed from scratch to respond to the evolution of demand and to the growing environmental awareness in all sectors. A true "systemic" response that brings FS 7.32 Compact to the top of its sector as it impacts on all the main functions of the machine, focusing on the operator, the connection between the vehicle, its management and functional and assistance control. 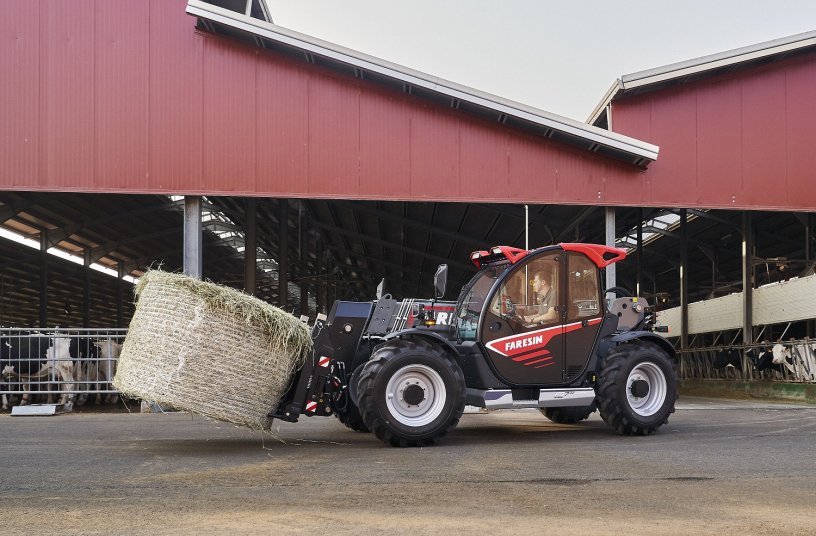 The FS 7.32 Compact project is the result of 20 years of experience in the telescopic sector and relies on an industrial system where Research and Development, Production and Marketing-Commercial work in a single integrated process that puts the customer at the centre of everything.

All the structural components of the new machine, including the sophisticated software that manages the integrated sensors, were in fact designed, tested and manufactured at the Breganze plant.

A Made in Faresin technology that is revolutionising the sector and that has already attracted global attention with the introduction of the first fully electric handler worldwide.

The new FS 7.32 Compact will be presented to the general public at Eima International in Bologna, where visitors will be able to learn more about this technological gem first-hand.

FS 7.32 Compact comes with a new design that started from a Faresin R&D idea and was developed in collaboration with prestigious specialist firms and cutting-edge partners exploiting executive technology.

The goal was to create a distinctive product, which combines exceptional performance with a captivating style that only Made in Italy can create.

For the FS range, the livery was also completely redesigned in order to mark the change. With the Faresin red identifier that stands out on the new cowlings, the Faresin grey boom is the same as the under bonnet and mudguards, which have also been revised.

The ennobling silver grey has been retained on the side bands bearing the model name and on the rims.

The characteristic element of this livery is the "scratch", the white mark that runs along the rib of the bonnet to emphasise its profile while at the same time assuming the role of a distinctive feature. The markedly tapered inclination on the right front wheel of the bonnet sets a new level of visibility for telehandlers. The result is an appealing, yet unprecedented design that sculpts an original and innovative driving position with unparalleled visibility combined with clean and decisive lines.

The first model of the new FS Range is the FS 7.32, a compact telehandler with 3.2 t maximum lifting capacity and a maximum lifting height of 7.1 m. The further characterising data are a steering angle of 37° which, together with the turning radius of only 3.8 m, for a machine with a wheelbase of 2.95 m, make this a high-performance machine with unique agility and with equally important stability.

Available in two versions, the standard one and a lowered “Low Cab”. With only 2.06 m at the highest point of the cab, this version is destined to become the ideal machine in many operational situations. In summary FS 7.32 is a telehandler designed to respond with versatility to the daily needs of off-road handling in all possible sectors of use.

Designing with a focus on the future also meant thinking about reducing environmental impact, lowering consumption and, at the same time, improving performance.

There are five engines available for the FS 7.32, all 4-cylinder Deutz from 2.9 to 3.6 dm3, water-cooled with power ratings from 55.4 kW to 100 kW. All comply with Stage V emission regulations with after-treatment technology using oxidation catalyst (DOC) or urea (SCR) and particulate filter (DPF).

All the engines are common rail, turbocharged, with intercoolers to meet the variable power needs linked to specific uses with optimised torque curves for high performance and rapid availability of power with low consumption. In addition, maintenance intervals of up to 1,000 hours result in a significant reduction in operating costs.

We also paid attention to safety with the introduction of the "AutoStop" which turns off the engine when the operator gets up from the seat, and then switches it back on again, also autonomously, upon return. Solutions that add fuel savings to the operator's protection. The hydraulic cooling fan automatically adjusts the rotation speed according to the temperature, reversible and electronically controlled, combines perfect temperature regulation with reduced consumption and represents the definitive solution for use in dusty environments.

The optimisation process of the spaces under the bonnet has achieved an efficiency of the air flows, also favoured by the new grids. In addition, the new layout of the engine and radiant units guarantees convenient access to all maintenance check points.

TRANSMISSIONS FOR EVERY USE

All versions of the FS 7.32 are equipped with Ecodrive hydrostatic transmission, an advanced solution capable of providing the power delivered according to the driving mode to obtain the most effective use of power with a consistent reduction in consumption and emissions.

There are two transmission solutions that differ in the number of ratios and maximum speed: a single gear with a speed of 0-30 km/hour for the Dynamic set-up. The two-speed mechanical gearbox allows to reach a maximum speed of 40 km/h while enjoying a reduced ratio for tasks that require greater traction. This solution is present in the Performance and Excellence versions.

The differential can also be chosen based on the intended use of the machine. There are two solutions available: axles with 45% limited slip automatic differential lock and an advanced solution with 100% hydraulically operated differential lock. The latter allows the FS 7.32 to tackle any terrain in absolute safety and with full traction control.

The hydraulic oil circuit adopts the same design logic to provide solutions for each use by means of a modular system. There are two solutions for the hydraulic oil circuit: gear pump or variable displacement piston pump, therefore in load sensing. The hydraulic part is the real muscle of the machine as it is oversized to guarantee versatility of use with flow rates from 120 to 180 litres/min, depending on the set-up, capable of ensuring rapid work cycles. The highly efficient flow-sharing distributors guarantee excellent multifunctionality and, with the introduction of the innovative electronic management system, there is simultaneous programmable control of several boom actions. The efficiency of the system is enhanced by the presence of the Ecofast valve which regenerates the oil coming out of the cylinder during the descent of the boom, improving the movements of the boom even at low speeds with significant savings on fuel consumption. The same logic was adopted with the regenerating valve which optimises the outreach times by reusing the oil coming out of the jacks. Their combination is programmable by the same operator through FS Display or FS Selector.

The designers have revised the interior of the cab making it a true flagship. The position of the controls has been completely redesigned to make their use more intuitive, becoming an outstanding feature of the cab. The result is a harmonious and pleasant arrangement of the controls, grouped by functional logic on a dashboard that has been completely revised in terms of layout and colours. The steering wheel is adjustable in height to adapt to the operator.

All information is now gathered in the FS Display, a 7-inch, anti-reflective colour touch screen, positioned on the right-hand mast. The engine operating parameters, load charts and other accessory functions such as the cab radio, air conditioning controls, headlight control, etc. are now visible in a single position.

The driver's seat with multi-adjustment pneumatic suspension, is fitted with the FS Joystick on the right armrest which brings together the control commands of the telescopic boom. Quick movements on uneven or rough ground are made safer by the integrated armrest. Switching between screens and the changing of settings takes place directly on the FS Display or through the FS Selector, an intuitive wheel control system, also positioned on the armrest.

In the compartments of the console there are two USB sockets as well as a number of compartments in which to conveniently store various objects including a bottle-holder.

The result of the new cab is a pleasant, tidy, comfortable, safe work environment, with 360° visibility to the outside. In fact, the new line has significantly reduced shadowy areas, thereby improving safety.

The ventilation and heating system from the cab with 4? adjustable vents represents a powerful demisting system; the air conditioning system also provides the operator with maximum comfort even in very dusty external conditions.

Everything has been designed to provide unique operator comfort. Access to the cab is facilitated by a comfortable and safe platform with courtesy light and internal LED dashboard that are activated when the door is opened.