A machine for every application 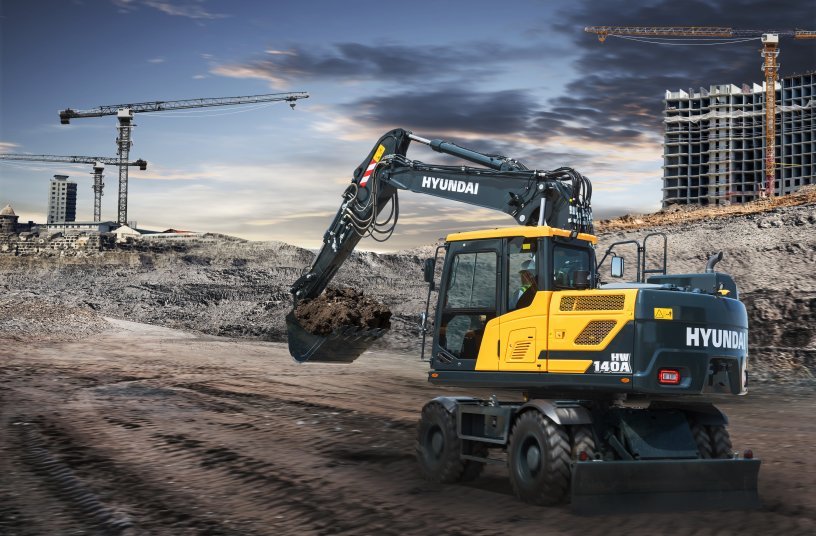 The HW140A, HW160A and HW170ACR are powered by a 4.5-litre Cummins B4.5 diesel engine, replacing the larger 6.7-litre engine in the previous generation of machines. Using a wastegate turbocharger, this compact engine has a Flex-Module two-can exhaust system, comprising a Diesel Oxidation Catalyst (DOC), Diesel Particulate Filter (DPF) and Selective Catalytic Reduction (SCR). There is no requirement for Exhaust Gas Recirculation (EGR), reducing service cost for customers, while the smaller engine is more fuel efficient than its predecessor. Despite the reduction in engine capacity, the new machines benefit from an increased output, with the HW140A, HW160A and HW170ACR now all delivering 129kW (173hp), up from 117kW (156hp) on the previous generation HW140. This drives the machine through a Rexroth load sensing hydraulic system, with load independent flow control for consistent machine operating speed and improved controllability for the operator. The three machines feature a redesigned stacked cooling module, making it easier to keep clean. A hydraulically-driven reversible cooling fan is now standard, reducing any risk of overheating and minimising downtime for cleaning and maintenance. The larger HW210A retains a 6.7-litre engine, however it moves to the latest Cummins B6.7 model. With a variable geometry turbocharger, the B6.7 has a single module after-treatment system, with the DOC, DPF and SCR located in a single exhaust can. Again, there is no requirement for EGR on this engine and no need for manual DPF regeneration, cutting cost and downtime for customers. As with the smaller engine, there is an increase in output, with the new Cummins unit delivering maximum power of 145kW (195hp). The 21-tonne machine has two Kawasaki hydraulic pumps with Electronic Pump Flow Control (EPFC), which has proven highly productive on Hyundai’s crawler HX210A and HX220AL. The machine benefits from a reduced minimum flow rate, improving fuel consumption by up to 8-11% depending on operation. Automatic idle is standard, further reducing fuel consumption, engine noise and exhaust emissions. 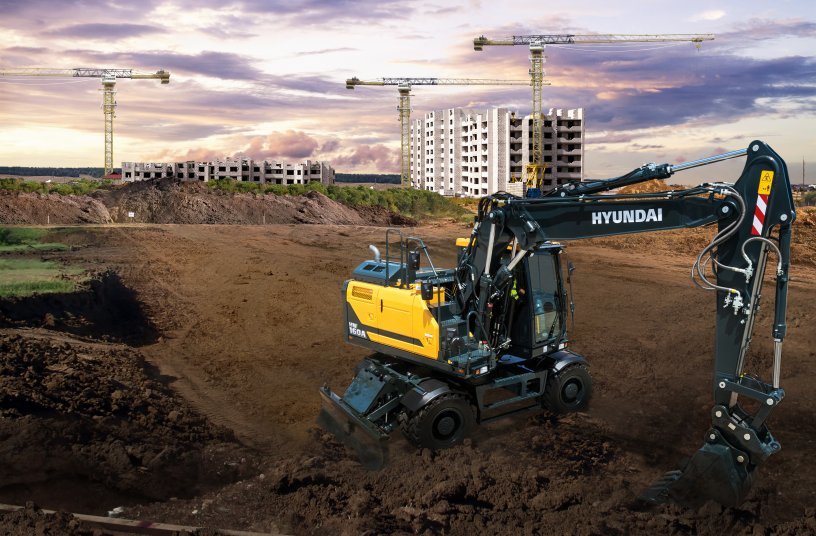 The HW140A and HW160A excavators’ swing centre and lower frame has been moved forwards by 100mm, boosting machine stability. In addition, the right-hand side of the upperstructure comes forward 150mm, to provide additional space for the fuel tank. The left-hand side moves forward by 230mm to improve visibility from the cab and to make additional space for the engine bay. The rear swing radius on the standard counterweight HW140A and HW160A also moves forwards by 200mm, to cut the rear overhang and make the machines more manoeuvrable on confined sites, while increasing lifting capacity.

For the reduced tailswing HW170ACR, the rear swing radius has been cut by a further 410mm, through the use of a cast counterweight, which is almost 800kg heavier than the previous welded unit. The upper structure width has been increased by 25mm. This compact radius model is the flagship of the new HW A-Series range, specifically designed to meet the needs of customers in the rapidly growing utility and services market, where highly manoeuvrable 17-18 tonne machines are essential. On the HW210A, the boom mounting centre has been moved by 10mm towards the right-hand side of the machine, to improve the gap between the boom cylinder and the cab. Here too the rear swing radius has been reduced, from 2,850mm to 2,740mm, making the machine more manoeuvrable on site and reducing the risk of striking the counterweight when slewing. On the lower frame, the wheelbase has been increased and the swing centre moved towards the rear of the chassis, to improve stability and weight balance. Axle location has also been revised, to more evenly spread the axle loads for a smoother ride. Axle oscillation cylinders now feature individual safety valves, to maintain rigidity in the event of a hydraulic line failure. The machines also have safety valves on all boom, arm and blade cylinders for maximum safe operation. The front attachment has been redesigned on the smaller models, with the dipper arm cylinder rotated to offer increased protection of the ram. Having the cylinder mounted with the ram at the top, has also improved weight distribution and machine stability. Improved arm bushing makes it easier for customers to install automated greasing systems.

For the HW140A, the HW160A and the HW170ACR, the dozer blade attachment and outriggers are bolted in place to the front and rear of the lower frame. Using identical mounting hole spacing, the dozer blade and stabiliser mounts can be positioned at either end, providing a range of options for customers. Mounted on a parallel arm system, the dozer blade has an increased working range, through longer dozer link length and cylinder stroke. This offers increased blade height and cutting depth and a larger space between the blade and the tyre for easier maintenance. On the HW210A the front stabiliser is welded in place, with the rear bolted, to provide a semi-interchangeable layout. The outrigger cylinders feature a new protection plate to reduce damage from falling debris and the outrigger design prevents the legs from penetrating into the ground when in use.

Machines can be equipped with an optional mounting bracket on the rear dozer blade for a trailer hitch. There are also electrical connectors for lighting and hydraulic connectors for trailer dump functions, adding to the versatility of the HW models. 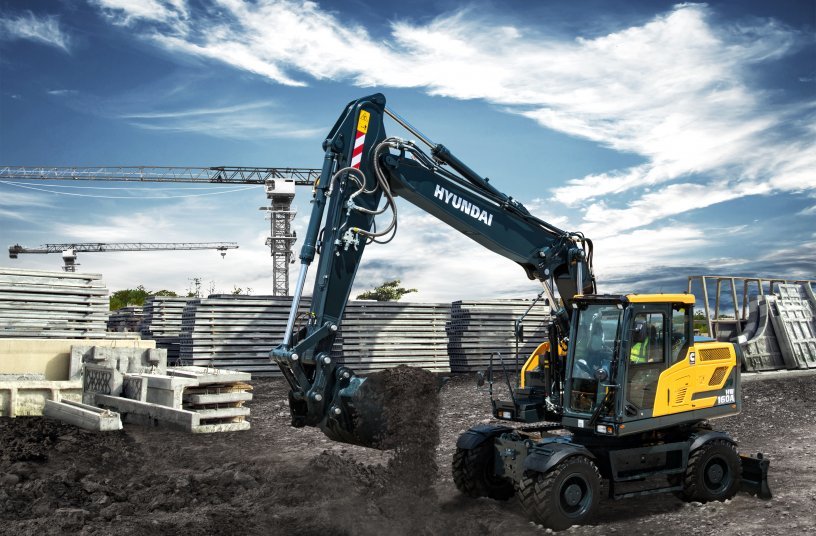 Access to the cab has been improved with additional steps, that conform to safety regulation ISO 2867, making it easier for the operator to enter and leave the seat. Additional steps also make it easier to access the machines’ upperstructure for service work. The operator’s cab now features parallel wipers on both sections of the front windscreen, delivering increased coverage of lower and upper windows. An additional mirror on the right-hand side of the machine and a front upper pillar that is 50mm slimmer further improve visibility. The cab door features a larger lower window, making it easier to see the ground to the left of the excavator. The wheeled A-Series models also feature Hyundai’s Advanced Around View Monitoring (AAVM) system, that uses video cameras to provide the operator with a 360° view of the machine on the in-cab monitor. The system includes Intelligent Moving Object Detection (IMOD) alerting the operator to the presence of other workers or objects within a 5m range of machine operation. The A Series wheeled excavators are offered with an optional radar with a second monitor, to provide rear detection of static or moving objects to a distance of 10m, in day or night-time conditions.

The excavators benefit from a new steering column, offering lower and upper section tilt and a central telescopic feature. With a slimmer design and no lever on the right-hand side, this results in improved visibility to the road ahead. Optional joystick steering, using the right-hand lever, is also possible at lower operating speeds and direction change has been moved to the joysticks, ensuring maximum control for the operator. The HW wheeled excavators are now exclusively offered with proportional joystick levers, for maximum operator control and ease of use. Buttons within the joystick head have been redesigned for easier operation and when the front axle oscillation is set to automatic mode, the ram lock can also be activated or deactivated using a button in the joystick, to improve productivity. The attachment controls now feature a continuous operation detent, for breaker or crusher mode, improving convenience for the operator. 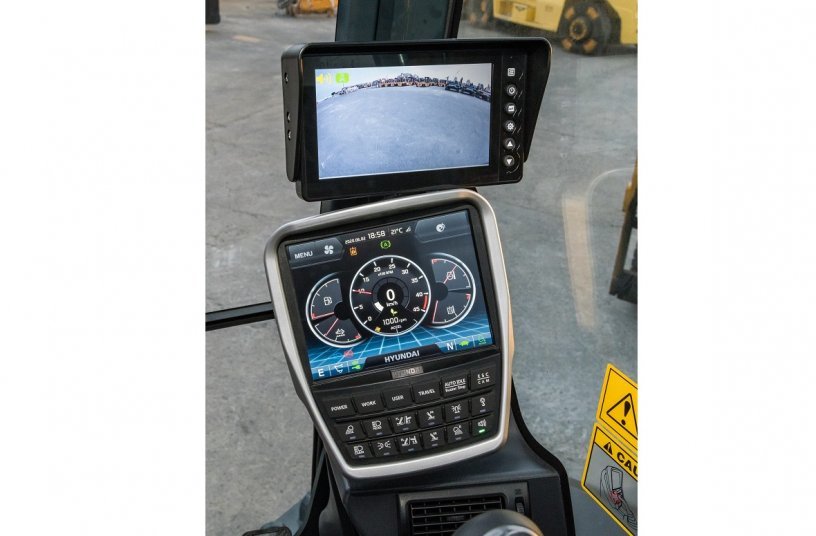 The pedals have been repositioned and the optional two-way driving pedal has been deleted, with direction changes now possible through the switch on the joystick. A two-piece floor mat makes it easier to clean the cab and reduces the risk of damage during maintenance work. All of the excavators feature an 8” touchscreen display for all machine function and control settings. There is a new Jog Dial Module with a relocated rotary controller and function switches, making it easier to access menus within the touchscreen system. Ride Control is an option on the A-Series models, allowing the machine to travel smoothly over rough ground. An accumulator absorbs ground impacts, allowing the boom to gently float, improving comfort for the operator. The system also includes a boom float option for use in grading.

All Stage V Hyundai A-Series excavators feature an Auto Safety Lock, to prevent unintended use of the boom functions. The system also prevents the engine starting if the safety lever is in the unlocked position, to prevent sudden activation of hydraulic functions.

The HW140A, HW160A and HW170ACR feature high density poly-ethylene mud guards, in place of the previous metal fenders. The HW210A retains the metal guards of the previous generation. As part of the move to Stage V, the excavators benefit from Engine Connected Diagnostics. Service technicians can access engine fault codes remotely, through a smartphone app, to ensure that they arrive on site with the necessary tools and parts to carry out any repair or service work. The system is backed-up by Cummins Quickserve support for rapid fault diagnosis. The machine control system also provides customers with the opportunity to edit on-screen menus, preventing unauthorised use of certain machine functions. This can be used to prevent operating mode changes, to maximise machine efficiency. 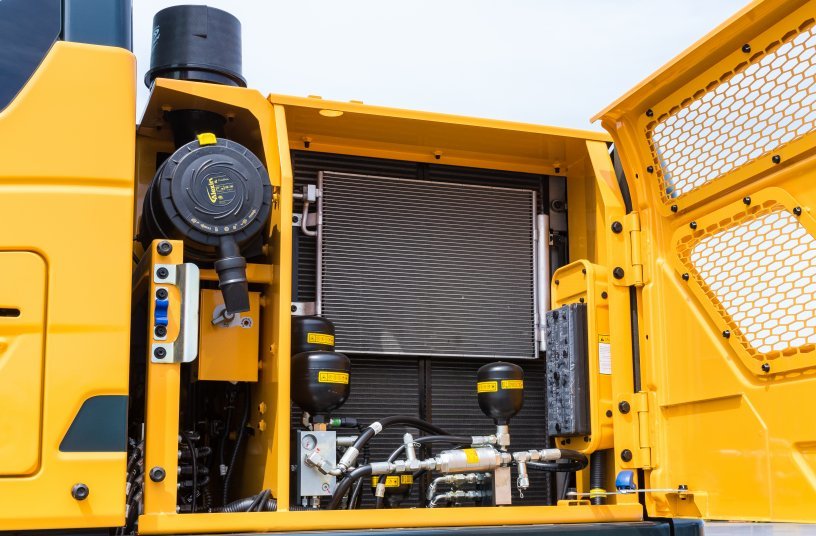 Peter Sebold, Product Specialist at HCEE, commented: “The new range of wheeled excavators from Hyundai offers plenty of features for customers working in infrastructure and civil engineering. The revised boom geometry, in combination with LUDV load sensing hydraulics, provides Hyundai’s new wheeled excavators with outstanding performance in multi-function operation, smooth controllability and the necessary stability for maximum productivity. Hyundai is establishing itself in a growing number of market sectors, by listening to customer feedback and responding to their requirements. The A-Series wheeled excavators will continue our expansion in this demanding sector of the market. All of our customers can aim high with the new Hyundai wheeled excavators.”