Using an excavator with a drum cutter attachment from KEMROC

The flow control barrage at the village of Viereth am Main (Germany) went through major renovation work. The pillars to the side of the weir had to be modified to suit the design of the new weir gates. Specialist contractors JOHANN BUNTE Bauunternehmung GmbH & Co. KG used a KEMROC KR 120 drum cutter attachment mounted on a 35-ton excavator to carry out the work. This combination provided maximum performance and precision while minimising vibration that could damage the historical structure constructed from plain, unreinforced concrete.

Dating back to 1925, the first barrage built on the river Main was at Viereth near the city of Bamberg in Upper Franconia. In general, a river barrage is made up of three main components (to the general public, they are summarised with the word “lock”), and these are a lock for shipping to pass through, a hydro-electric power station and gated weirs. Combined, these components constitute a barrage whose main purpose is to control the flow of the river and maintain a constant water level. If there is too much water in the river, the weir gates are raised to allow more water to flow through safely. If the water level is too low, the weir gates are lowered so that the water level does not fall too rapidly.

Through regular use over the years, several components such as toothed racks, rims, and wheels became corroded and worn and other mechanical and electrical components needed modernising. Because breakdowns at the Viereth Barrage were becoming more frequent, a major, wide-ranging modernisation project was started in 2014. To minimise disruption to marine transport and maintain a degree of control over the flow in the river, it was decided to renovate the two weir sections one after the other. The contracting company JOHANN BUNTE Bauunternehmung GmbH & Co. KG played a major role in this project. On completion of the work on the right-hand weir, work started this year on the left-hand section of the weir. BUNTE, as the general contracting partner in the consortium, in cooperation with a steel company started work on the concrete sections. 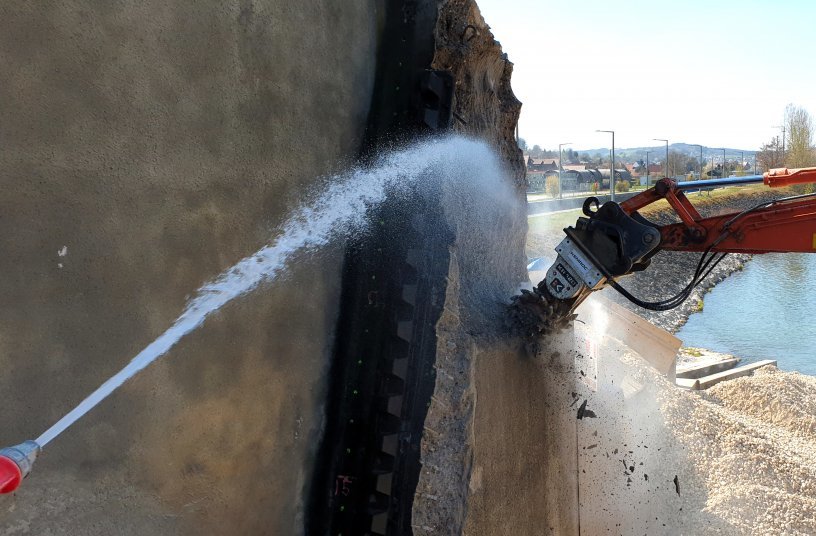 At the heart of the Viereth gated weir are three, 17 m high pillars, between which are the weir gates with the lifting mechanisms attached to the sides of the pillars. These adjust the height of the gates to manage the flow and regulate the depth of water. The gates and adjusting mechanism had to be replaced as part of the renovation work. Due to the design of the new lifting mechanism, the concrete pillars had to be modified before the new mechanisms could be concreted in place. For the removal of the concrete it was decided that a KEMROC KR 120 rotary drum cutter mounted on a 35-ton excavator would be the ideal tool combination. It met the contractual specifications while promising to meet financial requirements.

Drum cutters in the KR range from KEMROC are often used in demolition and tunnelling applications. They are also used in concrete renovation and profiling, trenching and pipe laying, quarrying and underwater construction applications. The attachments are built for demanding applications and they are fitted with high torque motors to develop extreme cutting forces. For the profiling work on the pillars at Viereth, the low vibration characteristics of the KR drum cutters from KEMROC was critically important. Built in the 1920s, the pillars are made from a relatively fragile, mostly non-reinforced concrete. In 1994 the surface layer had been removed and replaced with a mixture of sprayed concrete and mortar. According to the contractual requirements, the concrete removal process had to be carried out as carefully as possible to avoid any damage to the rest of the concrete structure. In addition, all necessary precautions had to be taken to prevent unintentional removal of concrete which could result in disruption to the shipping lanes. Therefore the use of blasting, hammers or chisels for the demolition work were not allowed. The only options allowed for the removal of the surface layer of concrete were grinding or high-pressure water jets.

“We decided to go with the drum cutter and excavator option”, explained Christoph Karsch, the site manager from BUNTE, for this complex project, “because the use of high pressure water jets would have been considerably more expensive and would have required extensive protection from flying material. In addition, we were able to carry out more work further down in the base of the pier with the drum cutter and progress promised to be quicker.” 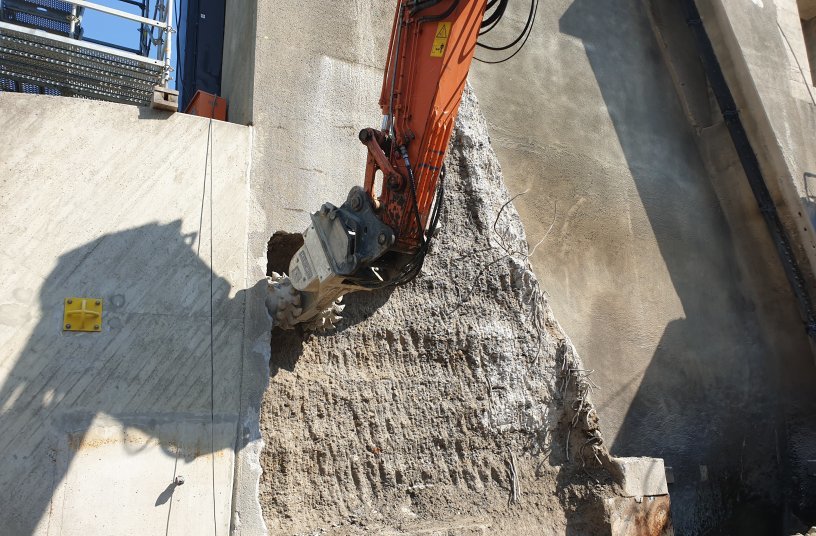 The milling work was carried out from the 6th till the 29th April 2020. At the centre of the action was a KEMROC KR 120 drum cutter attachment mounted on one of the company’s own 35-ton excavators. Christoph Karsch chose this combination after consultation with the mechanical engineering department at BUNTE. In 2019, BUNTE had experience of using a smaller drum cutter on one of their 25-ton excavators on the other weir section and this proved to be a little too small and underpowered for the conditions. According to the site manager, the performance of the larger drum cutter was much better, “The drum cutter was perfect in terms of performance, precision and gentle cutting action. It ran smoothly from start to finish.” A total of 270 m3 of concrete was removed from the two piers at an average rate of 10 m3 per hour. “Pick consumption was within acceptable limits,” explained Christoph Karsch, “and the cutter met little resistance in the plain concrete. We only saw any significant wear in some lightly reinforced areas and on the granite pillar bases.” 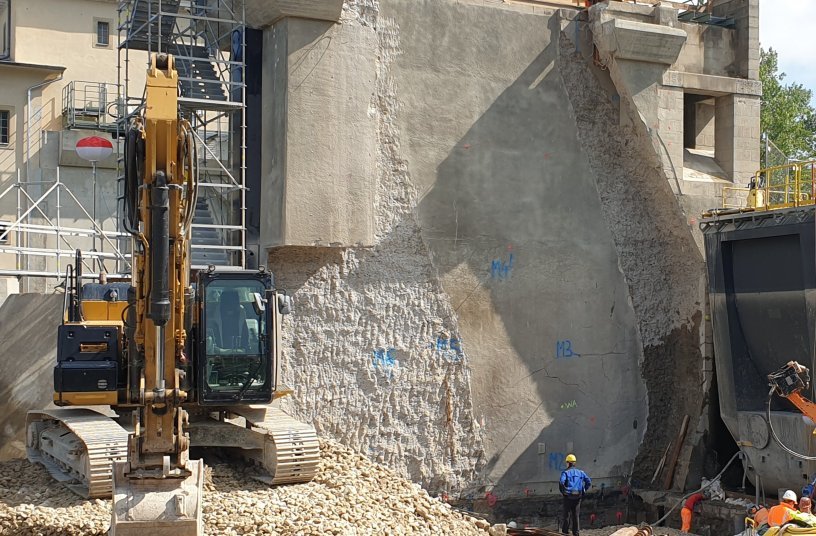 All concrete and steel construction work was completed on time.