Dismantling a Bridge, Piece by Piece

Using a large excavator and a KEMROC cutter wheel

Based in southern Germany, demolition experts Max Wild are involved in a spectacular demolition project. The old Saar Bridge at the Saarlouis autobahn junction has been replaced by a new, modern bridge with a higher capacity. The plan for demolishing the older bridge consisted of breaking it down into sections that could be placed on pontoons and floated to a crushing facility on the riverbank. In order to disconnect the lateral cantilever arms and the concrete slab between the two hollow boxes, the company used one of their 40-ton excavators with a KEMROC cutter wheel attachment.

Demolition work at the huge project of redesigning the Saarlouis autobahn junction provided some very impressive images. At this junction, the BAB 620 and BAB 8 roads branch off and the latter crosses the Saar River towards the city of Dillingen, Saarland (Germany). Demolition of the old bridge started after the four lanes of the new bridge were completely opened in November 2020. The client, the western subsidiary of Autobahn GmbH awarded the contract for the overall project to the consortium Schnorpfeil / SEH. The consortium sub-contracted the difficult demolition work of the old concrete bridge, which was a separate project, to demolition specialists, Max Wild GmbH.

Max Wild is headquartered in Berkheim in the Upper Swabia region and has several locations all over southern Germany. They have a comprehensive, modern machine park of demolition equipment and have extensive experience in the demolition of buildings, industrial complexes, and bridges. However, even for such a large company, demolition projects like the Saar Bridge do not come along every day. Naturally, motorway bridges spanning large rivers cannot be demolished from the ground. The first stage in the detailed plan for the demolition process involved lightening the hollow box section concrete beams spanning the bridge in both directions by removing all structurally non-essential items from the bridge deck. Once this was complete, the main structural components of the bridge should be lowered onto floating pontoons that would transport them to a crushing facility on the riverbank. 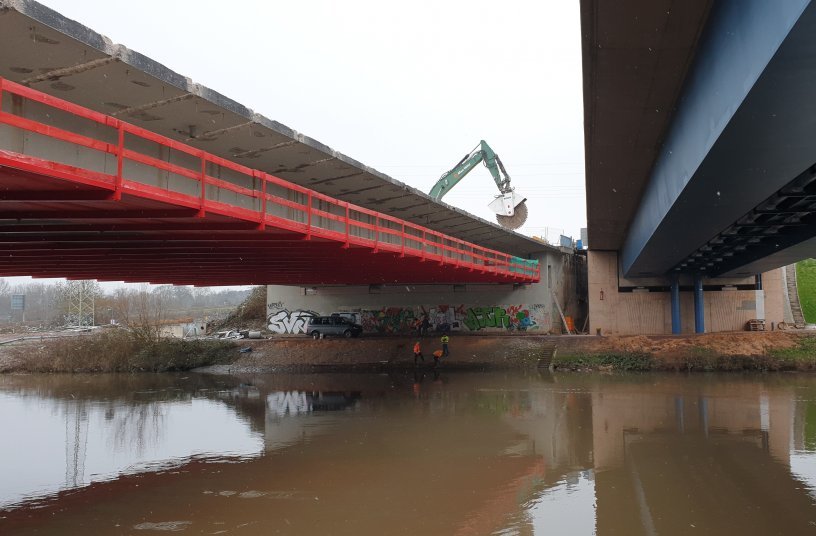 Structurally non-essential items on the bridge included the cantilever arms and the concrete slab between the hollow boxes of the autobahn lanes. To remove these components, the demolition specialists decided to try a new type of equipment. Following detailed discussions with KEMROC’s application consultant, Mr Marco Schön, it was decided to try a DMW 220/1000/130 cutter wheel excavator attachment (220 kW rated power, cutting depth 500 to 1,000 mm, cutting width 130 mm) which was to be mounted on one of the company’s 40-ton excavators.

Mounted on the arms of hydraulic excavators, the DMW range of cutter wheel attachments from KEMROC are designed for tough applications. Equipped with two lateral hydraulic motors, these attachments develop extremely high cutting forces which produce high production levels. They can even be used to cut through rock with a uniaxial compressive strength of 120 MPa or through heavily reinforced concrete. 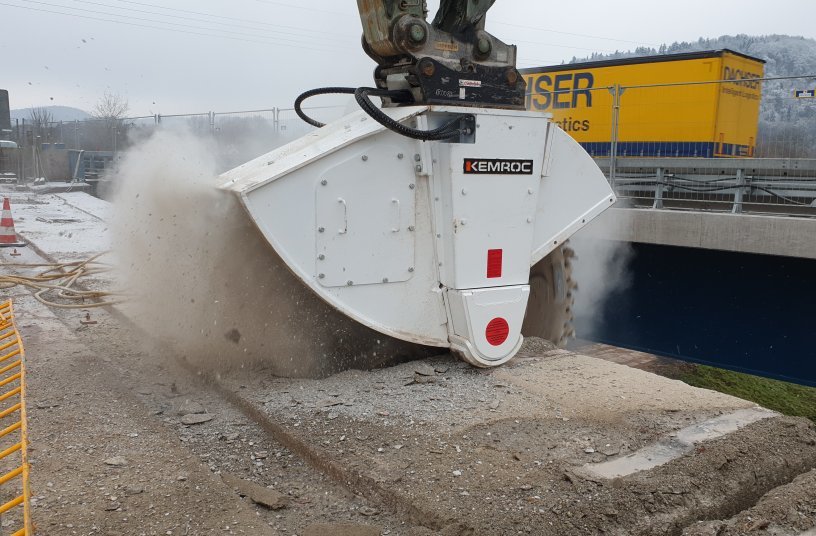 The DMW 220 encountered heavy resistance on the bridge panel which crossed the Saar River. Before, two pontoons with a special framework had been located under the bridge panel in order to support the two hollow box elements and float them out later. In order to reduce the weight of the span being carried by the pontoons, the cantilever arms on both were removed as well as the concrete slab located between the two hollow box sections. Under normal circumstances, Max Wild specialists would have cut these structures into sections using a concrete saw. But due to the extremely angled nature of the whole construction, they would have had to reset the saw very often which would have taken a lot of time. In addition, cutting depths as much as 65 cm would have been necessary which is why Max Fus, the Site Manager and his team decided to make only the longitudinal cuts along the bridge axis with a concrete saw and use the KEMROC cutter wheel on a 40-ton excavator for the crosscuts. The concrete was cut into segments, each weighing between 6 and 10 tons. Each segment was lifted out with a crane and transported to a crushing plant on the riverbank.

The cutter wheel was used in weeks 6 and 7 of 2021. Work was protected by scaffolding suspended over the Saar River. Although the cutter wheel did not cut through the concrete like a hot knife through butter, it achieved a surprisingly fast cutting rate according to Max Fus. He has a master’s degree in civil engineering and more than five years practical experience with Max Wild. Max Fus said, “The bridge was tensioned in a transverse direction and it was therefore structurally difficult to cut through. Nevertheless, I was surprised that the cutter wheel did not appear to perform differently when it was cutting through prestressed or non-stressed concrete. Working with a combination of diamond saw technology and the cutter wheel, we made relatively quick progress and achieved cutting speeds of around ten linear meters per hour”. He added, “Even with the relatively high rate of wear on the tungsten carbide tipped consumables, this method has been proven to be the most economical solution due to the high production rates”.