Using a KEMROC ES 60 universal cutter where precision is required

Construction of the new A44 autobahn from Kassel to Herleshausen (Germany) is forging ahead. Located along the route of the autobahn, the steep walls of the Trimberg Tunnel portals are supported with shotcrete faced with massive blocks of Jurassic limestone. In total, around 9,000 blocks are required and each one must be milled to size within very tight tolerances. A KEMROC ES 60 HD universal cutter mounted on a wheeled excavator is used for final adjustments to the block dimensions.

At around 600 m long, the Trimberg Tunnel is just one of numerous construction projects that were required when building the new A44 autobahn between Kassel and Herleshausen (Germany). After breaking through in each of the twin tunnels, work commenced on the interior lining and supporting the steep, shotcreted portal walls with a cladding made from Jurassic limestone blocks. The main contractor, ARGE HOCHTIEF / ZÜBLIN on behalf of their client, the project management company DEGES, subcontracted the Bad Hersfeld branch of STRABAG to clad both portal walls, each about 500 m long and up to 10 m high with blocks of Jurassic limestone. Each of the 90 – 180 cm long and 50 – 90 cm high limestone blocks were delivered to site by truck and then trimmed to precisely the correct length. This was the only way that the contractor could meet the joint dimensions specified by the client.

When work began on the east portal of the tunnel in April 2021, a rotary drum cutter mounted on a wheeled excavator was used to trim individual limestone blocks to size. Shortly afterwards, Enrico Trender, the application consultant from the manufacturer KEMROC, visited the site. He suggested doing a trial to compare the performance of an ES 60 HD with drum and rotation unit with the current attachment. The STRABAG specialists agreed to the trial. Both the excavator operator and his foreman, Simon Cox, were impressed with the speed and precision of the new attachment. 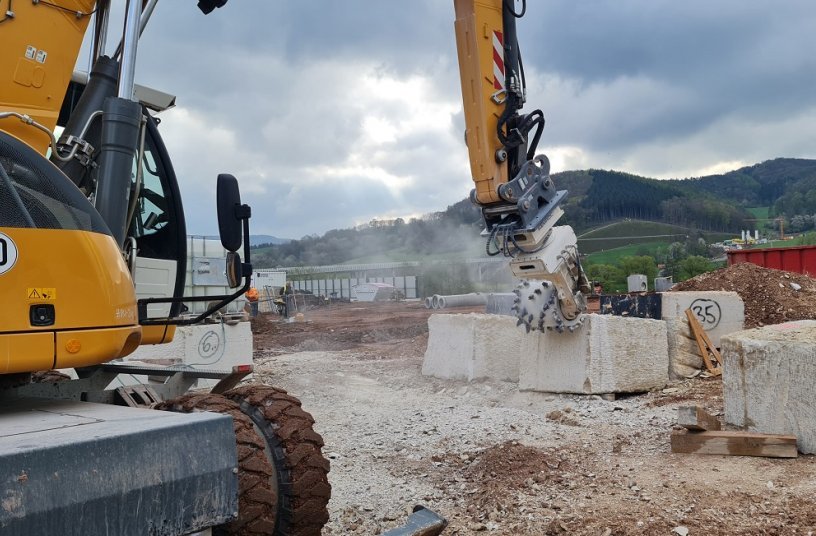 The ES range of universal cutter attachments from KEMROC were designed for use on excavators with operating weights from 1 to 40 tons. When fitted with a cutter wheel, they can be used as slot cutting attachments for concrete, asphalt or rock; when fitted with a cutter drum they can be used to accurately profile horizontal and vertical surfaces. For the application at the Trimberg Tunnel, Enrico Trender brought the ES 60 HD. With his years of experience in many different job sites, he knew that according to the weight and hydraulic power of the Liebherr A920 wheeled excavator, this model together with the optional rotation module would provide the optimum performance. Based on the successful results of the trial, the Site Manager, Andre Hatwig lost no time in renting the equipment.

For this large project, around 9,000 blocks had to be sized before they could be used at the portals of the Trimberg Tunnel. The sizing process in detail was as follows: The first step was to use a grapple to place the block with one end up against other blocks to stop it moving and with wooden wedges underneath it so that the face to be milled was facing up at an angle and it was at a distance from the ground. A petrol-powered cut-off grinder was then used to cut the outline of the required surface to size so that the finished product would have sharp, straight edges. Using a full hydraulic quick coupler, the operator changed the grapple for the universal cutter and milled the front face of the block in a vertical cutting motion up and down the face. He then changes back to the grapple, takes hold of the block, transports it and places it in position on the portal wall.

By the end of May, at the eastern portal, where the limestone clad wall reached almost 8.5m in height, about half the wall had been completed. According to the Site Manager, Andre Hatwig, the KEMROC attachment proved to be a flexible pacemaker for the entire process. He explained, “According to the excavator operator, working with the KEMROC universal cutter was more accurate, faster and quieter than with the standard drum cutter being used previously. Enrico Trender from KEMROC, brought the ideal excavator attachment combination on site and set the hydraulics on the wheeled excavator to the correct values. Now the operator saves an enormous amount of time and fuel while trimming these blocks.” Meanwhile, another KEMROC ES 60 HD universal cutter has been delivered to the western portal of the tunnel to do the same job.